"Mine eyes have seen the glory of the coming of the Lord!" 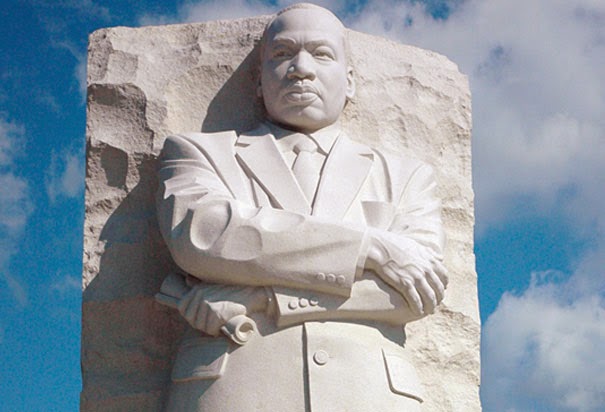 The stone man is the safest remembrance of all

One of the more popular statements of Dr. King is drawn from his most famous speech:

I have a dream that my four little children will one day live in a nation where they will not be judged by the color of their skin but by the content of their character.


In the context of the speech, it is a radical call.  Let us be more radical, still, and renew the challenges of Dr. King:

Don't pass judgment, so you won't be judged.  Don't forget, the judgment you hand out will be the judgment you get back.  And the standard you apply will be the standard applied to you.  Why do you notice the sliver in your friend's eye, but overlook the timber in your own?  How can you say to your friend, 'Let me get the sliver out of your eye,' when there is a timber in your own?  You phony, first take the timber out of your own eye and then you'll see well enough to remove the sliver from your friend's eye.

Jean Paul Sartre tried to create an ethic that didn't involve God.  His conclusion was that each person, in choosing an ethic for herself, chose for all humankind.  The ethic of the atheist Frenchman in the 20th century was little different from the one propounded by the Jewish prophet in the 1st century in the latter's most famous sermon.  And it is still a wildly radical standard that we still struggle to accept as valid, much less to put into action.

We can say that is the fault of religion, or religious institutions; but without them we wouldn't have these words preserved for 2000 years.  Without religious institutions, Dr. King would never have been selected to lead the civil rights movement and become the inspirational figure he is today, even if that figure is a pale image of the prophet he actually was.  And what institution can stop us from living according to a standard we accept as right?

And still Dr. King's source material is more radical than he dared to be;* and King was so radical we all sanitize him to fit a plaster saint into a niche in our moral houses.   Religion is dangerous, but not because it inspires us to violence.  We need no inspiration to seek power over others, we only need an excuse, and if it isn't religion it's tribalism or nationalism or simply racism.  Religion is dangerous because it dares us to be more fair, more just, more equitable, than we even imagine is possible.  Religion points us to a world that terrifies us with it's very vision:  imagine a world without judgment, a world ruled by forgiveness and not condemnation, a world where giving is more important than receiving, where the standard we apply is acknowledged to be the standard applied to us.  Is such a world possible?  And yet, if it isn't, what hope have we?

That is the danger of religion.  That is the radical nature of belief.  That is why Dr. King was a prophet, and why there is yet a long journey before any of us can see the Promised Land.

*A source material his defenders still deny.  West's article at Salon mentions King's Christianity if only because West is a seminary professor.  But the "real" Dr. King?  This article makes no mention of King's Christian faith at all, while it purports to return to consideration of his "real legacy."  Yet listen to King's speeches, or read his words, and try to ignore the religious basis for his radical vision.  The only way to do it is to ignore King in favor of a "King" of your imagination.  And in comments:  where are the atheists decrying any use of religion in the public square, declaring religion "dangerous" and based on "myths" and something that needs to be expunged not just from the body politic but from civilization itself?  The usual suspects are there; but their praise of King is unqualified; and absolutely silent on the fact that he was a Christian minister from the start to the finish of his public career.