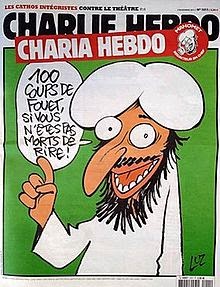 Richard Dawkins blames it on Islam.  Charlie Pierce says it's another part of the fight with modernity:

Nevertheless, and despite the fact that the witnesses make the murderers sound like Bond villains straight from central casting, this was unquestionably an assault on the right of free expression, probably committed in the name of religious fanaticism. It was an act of medieval, anti-Enlightenment barbarism, and the fact that a lot of people who aren't usually so tender toward France and its leftists -- or towards the Enlightenment itself, for that matter -- have attached themselves to the horror in order to proclaim their righteousness atop a pile of corpses ought not to obscure the truth of it. There are genuine values -- honored only in the breach by some, but no less genuine for that -- under armed assault here. Charlie Hebdo's staff was murdered to stifle the publication's voice, no less than Elijah Lovejoy was murdered to stifle his. This is the mass, unbridled, brainless Id of the barbarian at war with modernity in all its expressions.

And he's right.  This isn't a pure expression of religious sentiment, as Richard Dawkins insists it must be seen.  It's a reaction against modernity, against change, against a wider world of which we are all only a part.  Seek out comments and articles on the web about religion, and the ones from America almost uniformly consider fundamentalist Christianity normative for all religious belief, and violent extremists acting in the name of Islam as the only "real Muslims" on the planet (despite the fact the majority of the world's Muslims don't live in Arabic countries).   Mr. Pierce points out we haven't even seen the faces of these attackers, yet.  Does anyone expect them to be Asian?  And yet, the majority of the world's Muslims are Asians.

Yet still we expect "fanatical" Muslims to be Arabic, and we expect all Muslims to be from an Arabic country.  If these fanatics are angry with a world that doesn't look the way they expect it to, what is to be said of us, except that our violence is done by drones, which is to say by remote control, and done by people we don't even associate with, by people we can't even identify.  It is done by people who, we are assured, get to come home every day to their suburban middle-class American lives, after raining down hellfire and destruction halfway across the world from the comfort of a padded chair and an air-conditioned control room.

Our violence is no more part and parcel of our lives than theirs is; or maybe it is, but it's our violence, so it's okay.  It is their violence which is the more heinous.  And no, this kind of murder and mayhem has no justification.

But it doesn't happen in a vacuum, either; or merely represent a clash of ideologies between "ours" which is good, and "them" who are deluded, and are deluded because they are "bad."

ADDING:  BBC World Service tells me the picture I chose above led to a firebombing of the offices of "Charlie Hebdo" in 2011.  At the time the editor (who died in the shooting) told the BBC it was the work of "idiotic extremists" and did not represent the majority of the Muslims living in France.  He also called it an assault on freedom.  We could repeat those words today.

Mark Fiore, interviewed by the BBC, said there are centuries of depictions of Muhammed, that only recently had it become forbidden.  If true, that tells me Mr. Pierce's analysis is again much closer to correct than that of Dawkins.  The three suspects have been identified, two of them Algerians; which further underlines my argument that this is a clash of cultures, even a political act (as many on the streets of France were reportedly saying), and not a religious act at all.

Certainly not an act of "Islam" or of all Muslims around the world, anymore than a drone strike in Pakistan is an act of democracy, or one for which I am personally responsible.

And one last thing:  NTodd, as usual, makes an excellent point (despite quoting me in my full typographical error-prone glory!).