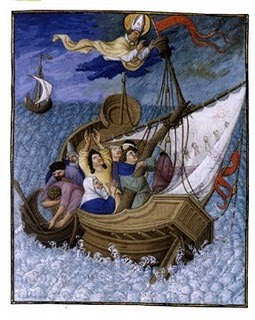 Let us all say: Rejoice, O guardian of the people of Myra,
Their head and honored counselor,
The pillar of the church which cannot be shaken.
Rejoice, O light full of brightness
That makes the ends of the world shine with wonders.

Rejoice, O divine delight of the afflicted,
The fervent advocate of those who suffer from injustice.And now, O all-blessed Nicholas,
Never cease praying to Christ our God
For those who honor the festival of your memory
With faith and with love.
--Orthodox Liturgy

WHAT keeps you from giving now? Isn't the poor person there? Aren't your own warehouses full? Isn't the reward promised? The command is clear: the hungry person is dying now, the naked person is freezing now, the person in debt is beaten now-and you want to wait until tomorrow? "I'm not doing any harm," you say. "I just want to keep what I own, that's all." You own! You are like someone who sits down in a theater and keeps everyone else away, saying that what is there for everyone's use is your own. . . . If everyone took only what they needed and gave the rest to those in need, there would be no such thing as rich and poor. After all, didn't you come into life naked, and won't you return naked to the earth?