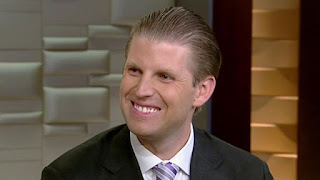 “As unfortunate as it is, I understand the quagmire,” Mr. Trump said in an interview Wednesday evening. “You do a good thing that backfires.”


That's not the PEOTUS, that's his son Eric talking.  The context is an offer to buy time with the PEOTUS, who will by then be POTUS, at the inauguration.  The offer was floated (for a minimum 7 figure "donation") by a non-profit set up by son Eric, which listed him as one of the event organizers for this access pay for play.

What backfired is that he got caught, because his actions are now subject to scrutiny, not to a yawn because that noise in the walls is just the cockroaches, er, rather, the Trumps again.  The "good thing" he was going to do?  Something for himself, rather the way Daddy ran the Trump Foundation.  This is a summary of the entire enterprise, almost up to the event of Eric's quoted lament:

The Trump sons and two longtime pals stand up a one-off 'nonprofit' to hold a fundraiser the day after the inauguration to sell access to the Trump Family. Nominally, the cause is 'conservation'. But they hadn't even figured out an explanation of what they were going to do with the money. The putative charity which stood to benefit said it hadn't decided whether it wanted to be involved. So much for that.