Fourth Sunday of Advent 2016: "When you are old and grey and full of sleep" 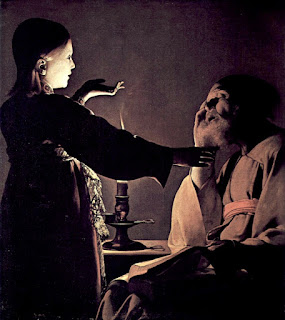 7:11 Ask a sign of the LORD your God; let it be deep as Sheol or high as heaven.

7:13 Then Isaiah said: "Hear then, O house of David! Is it too little for you to weary mortals, that you weary my God also?

7:14 Therefore the Lord himself will give you a sign. Look, the young woman is with child and shall bear a son, and shall name him Immanuel.

7:15 He shall eat curds and honey by the time he knows how to refuse the evil and choose the good.

7:16 For before the child knows how to refuse the evil and choose the good, the land before whose two kings you are in dread will be deserted.

80:2 before Ephraim and Benjamin and Manasseh. Stir up your might, and come to save us!

80:4 O LORD God of hosts, how long will you be angry with your people's prayers?

80:5 You have fed them with the bread of tears, and given them tears to drink in full measure.

80:6 You make us the scorn of our neighbors; our enemies laugh among themselves.

80:17 But let your hand be upon the one at your right hand, the one whom you made strong for yourself.

80:18 Then we will never turn back from you; give us life, and we will call on your name.

Romans 1:1-7
1:1 Paul, a servant of Jesus Christ, called to be an apostle, set apart for the gospel of God,

1:2 which he promised beforehand through his prophets in the holy scriptures,

1:3 the gospel concerning his Son, who was descended from David according to the flesh

1:4 and was declared to be Son of God with power according to the spirit of holiness by resurrection from the dead, Jesus Christ our Lord,

1:5 through whom we have received grace and apostleship to bring about the obedience of faith among all the Gentiles for the sake of his name,

1:6 including yourselves who are called to belong to Jesus Christ,

1:7 To all God's beloved in Rome, who are called to be saints: Grace to you and peace from God our Father and the Lord Jesus Christ.

Matthew 1:18-25
1:18 Now the birth of Jesus the Messiah took place in this way. When his mother Mary had been engaged to Joseph, but before they lived together, she was found to be with child from the Holy Spirit.

1:19 Her husband Joseph, being a righteous man and unwilling to expose her to public disgrace, planned to dismiss her quietly.

1:20 But just when he had resolved to do this, an angel of the Lord appeared to him in a dream and said, "Joseph, son of David, do not be afraid to take Mary as your wife, for the child conceived in her is from the Holy Spirit.

1:21 She will bear a son, and you are to name him Jesus, for he will save his people from their sins."

1:22 All this took place to fulfill what had been spoken by the Lord through the prophet:

1:23 "Look, the virgin shall conceive and bear a son, and they shall name him Emmanuel," which means, "God is with us."

1:24 When Joseph awoke from sleep, he did as the angel of the Lord commanded him; he took her as his wife,

1:25 but had no marital relations with her until she had borne a son; and he named him Jesus.

I've thought more and more lately, as I enter "old age," as I care for my elderly parents and see my future in their lives, what Joseph would have appreciate the words of his son at the end of John's Gospel:  "...when you have grown old, you'll stretch out your arms, and someone else will get you ready and take you where you don't want to go."  Because it's pretty clear from Matthew's account that the angel is telling Joseph to go somewhere he doesn't want to go.

Joseph here is Abraham.  Mary is pregnant, and that means someone else has been with her.  But the angel of the Lord tells Joseph a story, and Joseph accepts it without question.  He is Abraham, being told by God to leave his people and go where God will lead him, and with no more assurance than that, Abraham goes.  With no more reason to believe than that, Abraham believes.  Joseph is Abraham.  Israel's history is repeating itself.  Maybe Abraham didn't want to go there; but he did.  Maybe Joseph doesn't want to do this; but he does.  Your betrothed is pregnant, but it's okay, it's not the child of another man, but of God?  Sure, why not?

And notice it is Matthew who changes "young woman" to "virgin."  There are endless discussions about why that happened, ranging from historical accuracy to an unfortunate misquote, maybe even a poor transition from Hebrew to Greek.  No matter; it suits Matthew's story that Jesus of Nazareth was not merely human; it suits Matthew's claim that Jesus came directly from God.  And it keeps Joseph in charge, even though Joseph is only the father legally.

But it isn't at all clear this is where Joseph wants to go.

But was Joseph an old man?  Tradition says so, but again, it doesn't matter.  We have him fixed in our minds that way; better to leave him there.  Did he object to his wife's pregnancy?  Matthew implies a mild objection, but one aimed at protecting Mary.  Tradition, again, embellishes:

Isaiah writes before the Exile that is coming; the Psalmist writes from that Exile; they both await a very real, very physical salvation from the Lord.  Matthew writes in the aftermath of that exile and the failure of Israel to continue as a sovereign nation.  If he uses the words of Isaiah for his own purposes, who can blame him?  If we add details to the bare bones of his nativity story, who can blame us?  We need to understand this.  We need to make these people, people we recognize.  "The Cherry Tree Carol" does that with a miracle, an act of power (dounamis in the Greek, the word used for "miracle" in Matthew, Mark, and Luke) which is also a semeia, a sign (John's "miracle").  What do we do to make this story human, in our terms?

We see Joseph trying to be a good man, and to protect Mary if he can.  We see Joseph accept the word of a dream that he can adopt the son as his own; and that will protect Mary, too.  We see Joseph name the child, which makes the child his own.  Already we see they were "each one quite odd:  a mensch, a virgin, and a god."

And he does what he is asked, because he accepts the word of God.

There is much we can learn about faith from Joseph.  We only know that, like Abraham, he accepts what he is told.  We never learn why.  The story doesn't penetrate to his psyche, to his inner dialogue. He doesn't even question the angel, or declare himself a servant of the Lord.  He just does as he is told.  But just as Mary does before Gabriel, Joseph accepts.  His actions speak for him.

There are things we consider commands in the scripture; the angel's word to Joseph is not one of them, anymore than God's word to Abraham to leave his land and people and go to where God will lead, is a command.  If Abraham were commanded rather than directed, if he acted in response to an imperative rather than chose to act in faith, how would Abraham be an example to us?  Where would his trust, his faith, be?  If Joseph had no choice but to follow the angel's words, what credit would that be to him?  We have commands in Christianity; this time of year, especially, we even talk about them:

WHAT keeps you from giving now? Isn't the poor person there? Aren't your own warehouses full? Isn't the reward promised? The command is clear: the hungry person is dying now, the naked person is freezing now, the person in debt is beaten now-and you want to wait until tomorrow? "I'm not doing any harm," you say. "I just want to keep what I own, that's all." You own! You are like someone who sits down in a theater and keeps everyone else away, saying that what is there for everyone's use is your own. . . . If everyone took only what they needed and gave the rest to those in need, there would be no such thing as rich and poor. After all, didn't you come into life naked, and won't you return naked to the earth?

We need to make the concerns of the hungry, the naked, the prisoner, into commands; and even then we can't seem to follow them.  Perhaps we need to learn to let someone else get us ready, and let someone else take us where we do not want to go.  Perhaps, for at least the rest of Advent and Christmastide, we should ask ourselves:  What would Joseph do?