Don't think of a Lakoff 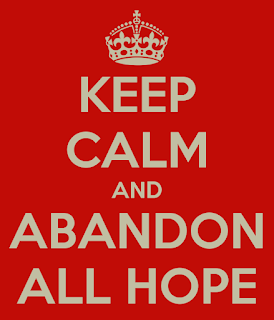 Electors, both Republican and Democratic, were urged to vote their consciences.  Turns out they did, although only two GOP electors (in Texas!) actually cast ballots against the prevailing popular vote in their state.

Does this prove GOP electors are without a conscience?  That they're fine with Donald Trump and have no questions about the interference of Russia, a point raised by some 10 Democratic electors before last Monday?  Maybe.

Or maybe it proves that GOP electors and Democratic electors (well, a handful of the latter, based on the evidence) have different definitions of what the word "conscience" means.  Aye, there's the rub.

Is this a new division in America, a shocking development, an issue upon which the republic falls, or falls apart?  Not likely; but we do mean different things by the very same word, and I don't mean some cute regional difference such as what we call syrupy carbonated beverages.  There are fundamental differences in the world we see, and the nation we think we are.

I read an analysis of the popular vote in a comment at Salon, which quoted what was apparently a posting (on a company website?  a personal blog?  I dunno, but there was a link), arguing that the popular vote of California, the most populous state in the union, should be set aside because it "gave" Hillary all the extra popular votes she won, and why should California have that much importance? (Adding:  yes, this really is a thing.)

Because the citizens of California are U.S. citizens, too?  (rather like why we should have saved New Orleans after Katrina:  because they were U.S. citizens, even if they were poor, black, and abandoned by the city and state governments, and rejected by local counties around them.).  It's a silly argument that depends on deciding ab initio that some votes are more valuable than others, especially when those votes produce the outcome some want.  Imagine making that argument if Trump had lost the electoral college as well as the popular vote.

But the same people who think Hillary Clinton had uncountable conflicts of interest, now think Donald Trump has none worth mentioning.  To-may-to, to-mah-to?  Should we call the whole thing off?  Or should we recognize that, just as we have regional dialects in which words have clear meaning to one group, but not another (in Texas, I am always "fixin' to get around to it."  Baptist preachers used to think it was the funniest thing in the world to hand out round pieces of wood, about the size of a silver dollar (remember those?) labeled "to-its."  Get it?  My wife told an employer in St. Louis once that she was "fixin' to" do something, and the office erupted in laughter.  In Texas nobody would have blinked.).  We talk past each other because what we mean by "base appeals" is not the same thing other people mean.

So Democrats (well, again; some) appealed to the "conscience" of GOP electors; who may well have examined their conscience and said "I'm fine with this."  Maybe that's faithless, like this comment from Thought Criminal's blog:

I used to call myself an evangelical Christian, but I can't now that Trump hijacked the movement. It's one of the most horrifying things I can think of. My religion is the #1 reason I'm against him. If it wasn't for that I probably would have voted for him, because it's what people in my demographic do. (I'm a straight white guy from a working class family in Mississippi.) I still believe the same as before, but I want nothing to do with evangelicalism any more. If I wasn't white it might be different. When pollsters talk about evangelicals they really mean white evangelicals.... Trump is the most anti-Christ politician I know of.

I wouldn't argue with the sentiment, but apparently a lot of evangelicals would.   Are they faithless? Do I sway them by appealing to their consciences?  Do I damn them by accusing them of lacking a conscience?  Which one would fix the problem of making my conscience superior to theirs (which is obviously the problem, right?)?

There's going to be a lot of finger pointing in the next few months, most of it to make sure there are no fingers pointing back at the finger pointers; or at least that there are more fingers going in other directions.  There will be more complaining that Obama didn't do enough to conquer this problem, to smash the enemy and drive them before him, relishing the lamentations of their women; or at least, being far too optimistic about the character of the American public.  Lots of anger from lots of armchair generals, in other words, of whom Louis Black rightly said:

Still, armchair generals know only victories. When one has no skin in the game, if an action they advocate happens and doesn't work they will simply argue that it wasn't carried out well.

Obama failed, but we would have succeeded.  He only won election twice, as the first black President with a very non-"American" name, subject of vilification and outright racism, who accomplished much in the face of a Congress at first reluctant to work with him, and then for 6 years actively hostile to him, an opposition driven by financial fears and racial animus, but no, he didn't do nearly enough, and his "audacity of hope" was the wish of a Pollyanna.  The only people allowed to talk about that "shining city on a hill" are white Republicans and white Republican Presidents.  Because hope is "their" language.

Ours is despair; because we can't have absolutely everything our way; and because Donald Trump has proven there are two Americas; and we haven't decided if we need to talk to them, or fight them to the death.

As for making common cause with the blacks and the Hispanics, and even the Asians, and women, and the LGBTQ, and all the other groups of 'identity politics' (!), well, they will always be with us.  It's the disenchanted, disenfranchised white males we need to reach out to.  Because, after all, it's not about race because it's never about race; but white males are just so much more important.  I mean, maybe, 3/5's more?

Is that what we're talking about, and we don't even know it?