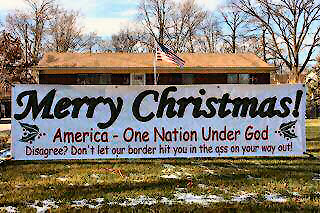 There is indeed nothing new under the sun.

The election of Trump is a sea change because certain people (hem-hem) couldn't foresee it happening.

But is it a sea change, really?  Charlie Pierce argues it's the result of 40 years of Republican efforts to declare government worthless and "the problem" (Ronald Reagan) and that they alone provide the cure (even though whenever they are in office the economy slides off a cliff, as it did under W., and Democrats manage to keep things running smoothly).

There are arguments now that this victory is the victory of the Koch Brothers, not Donald Trump and Kellyanne Conway.  It is certainly the triumph of John Bolton and Tom Cotton, who, in the China/Taiwan phone call fiasco, see an opening to run the diplomacy of the U.S. their way.  Bolton was the U.N. Ambassador under W., but Cheney & Co. kept him in check.  Now, if he's allowed to run amok, is that a sea change in American politics?  Or just a certain inevitablilty arising from American exceptionalism?

Donald Trump won Michigan by 0.22% of the vote.  That may be one reason he is contesting the recount there so vociferously.  He did not sweep the electorate in a landslide, and with a slight alteration in the distribution of the vote, he would be back in Manhattan tweeting rather harmlessly about the insults he's endured from "Saturday Night Live" (if Alec Baldwin were still impersonating Trump under such a scenario).  He won because of a peculiarity in the Constitution, because of the enduring influence of the "peculiar institution" of American slavery, not because the pollsters miscounted the desire for Brexit.  And he won because the GOP paved the way for him; and now they have him, but so do we.

But he won because the people who put him into office (barring a miraculous decision by the electoral college electors that Trump really does have too many conflicts of interest to take office and not offend the Constitution) have always been with us, and always will be.

These people are not concerned by Trump insulting China, because the only foreign relations they understand is American superiority in all things.  They have no clue how diplomacy works, or that it works at all.  They don't care because they are, at heart, nihilists.  Hillary Clinton was right:  they are "deplorable."  They are the ones at Trump rallies chanting "Lock her up!", with no clue what they are asking for or whether the law even provides for it.  They just know "law=justice" and "justice=jail," and that's all they really understand about government.  Which is not to say they shouldn't have the vote (I saw comments to that effect on the internet.  Truly the internet is wondrous:  all manner of stupidity can be found there), but it is to say they are always part of the voting bloc.  They think only in terms of power, and power is only used for vengeance.  Which is pretty much the American heritage of the "peculiar institution" which prompted the creation of the electoral college in the first place.

These are the people who have been persuaded that there is a "war on Christmas" (though not this year.  Victory, comrades!) because people say "Happy Holidays," a phrase that goes back at least to Bing Crosby crooning it in the 1940's, a phrase I was explicitly told in my childhood included people who didn't celebrate Christmas, like Jews (Muslims weren't on the cultural radar screen in the '60's, and atheists?  Who were they?).  But the concerns of Trump voters are all about economics, not about race, because it's never about race.

And it continues to go down smooth*:

“To be honest with you, the waters here seem like a little bit of a tempest in a teapot,” [Vice-President elect Mike] Pence said, arguing the media had stirred up any controversy.

“I think most Americans and frankly most leaders around the world know this for what it was,” he said. “And it’s all part and parcel. I think you’re going to see in a President Donald Trump a willingness to engage the world but engage the world on America’s terms.”

Blame the media (blame somebody, not "us"); and act defiant.  Except this isn't a matter for purely public consumption anymore.  Now Trump speaks to the world, and speaks for the country; not just for the people who chant his name at his rallies.

They won this time because of distribution, and because of voter turnout, and not because of belligerence..  They didn't win because they are newly inspired to take over the reins of government.  They won because Trump motivated them, and Clinton didn't motivate her voters.  And some of them are already disappointed with their champion, and more of them will be.  Trump won because Andrew Jackson's voters have never left American political culture, and because every once in a while they get to choose.

And because Hamilton's mechanism for preventing a demagogue from taking office has never worked, and it never will.  Turns out we are better off when we trust the people, than when we trust systems and institutions.  Donald Trump lost the popular vote, and he already has the lowest approval rating of any President in history.

What hasn't changed is that the "system" didn't save us.  What also hasn't changed is that we won't ever acknowledge that.  That's the lesson of "The Big Short," except the film tells the story of how a few individuals got rich off the very system that screwed so many, and ruined so many lives.  Even when we tell the story of recent history, it's the system that is our salvation.  Well, it's the salvation of the people whose names we know.  Brad Pitt and Steve Carrell and Christian Bale, all of whom we feel sympathy for, especially the first two, who at least feel bad about getting so rich of the misery of others.  But the lesson is still:  the system screwed you over, so be mad at the system, not at the people who profited from it (they all lost money, according to the movie; except at the end, where it acknowledges they didn't, but the institutions that did remain faceless and anonymous and inchoate, so at whom do we direct our wrath?)

As long as we are convinced that systems will save us, we will fall back into this pit, and never climb out of it.  But that's a feature, not a bug; it's baked into the very Constitution our "Founding Fathers, in their "infinite wisdom," bequeathed to us.  And like the children of an ancient and hefty bequest that has served us for generations, we dare not inquire too closely into our situation, lest it fall apart and leave us looking for a new system to solve all our problems.

“It doesn’t matter to me. He won the election,” [Speaker of the House Paul Ryan] said. “The way I see the tweets you’re talking about, he’s basically giving voice to a lot of people who have felt that they were voiceless. He’s communicating with people in this country who’ve felt like they have not been listened to. He’s going to be an unconventional president.”

“Who cares what he tweeted, you know, on some Thursday night, if we fix this country’s big problems?” he added. “That’s just the way I look at this.”


Maybe it's time to re-think that whole  "voice to the voiceless" thing.  Because sometimes what you give voice to, should really remain silent.  The people who have "not been listened to," can be the very people who shouldn't be listened to (Starting with a Speaker of the House who thinks this country's biggest problem is that Medicare is not privatized yet.)

Democracy is SO messy!

*A reference, quite ungrammatically, to a Robert Silverberg story about a psychiatrist computer that begins to take on the psychoses of its patients.