The awful power of French Aphorisms 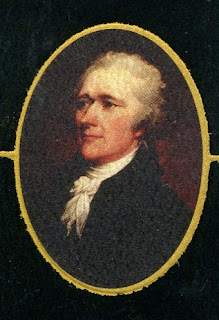 This comes from Rick, to whom should go full credit (I haven't read Chernow's Hamilton, and don't intend to; I might like the play, but I still can't quite warm up to musicals that aren't by Sondheim.  I consider this a weakness, not a bragging point.)  It's the quote from Chernow I'm most interested in, because it proves the French right:  the more things change....

In its final report in late May, the Republican-dominated committee could not deliver the comeuppance it had craved.  Instead, it confessed that all the charges lodged against Hamilton were completely baseless, as the treasury secretary had insisted all along.  And what of the endless Jeffersonian insinuations that Hamilton had used public office to extract private credits?  The report concluded that it appears 'that the Secretary of the Treasury never has, either directly or indirectly, for himself or any other person, procured any discount or credit, from either of the said banks...upon the basis of any public monies which, at any time, have been deposited therein under his direction.'  The vindication was so resounding that Hamilton withdrew his long-standing resignation, and his cabinet position grew more impregnable then ever..  Nevertheless, it frustrated him that after this exhaustive investigation his opponents still rehashed the stale charges of misconduct.  He had learned a lesson about propaganda in politics and mused wearily that 'no character, however upright, is a match for constantly reiterated attacks, however false.'  If a charge was made often enough, people assumed in the end 'that a person so often accused cannot be entirely innocent.'

Not just the old chestnut about truth getting its boots on while a lie is half-way 'round the world, but the character of the accusations.  Interestingly, a century or so later, the accusations are an historical footnote.  I suppose there is some comfort in that.  Still, I wonder how many people in Hamilton's day continued to think that, with so much smoke, there must have been some sort of fire?

It also makes one wish the Electoral College would actually, for once in history, work the way Hamilton said it was supposed to.  But the more things change....