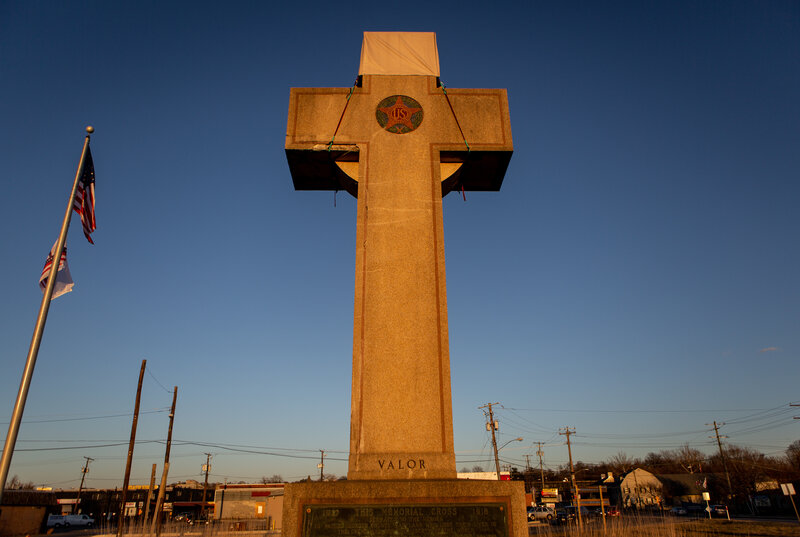 I have a problem with my browser, in that I can't comment on posts on blogspot.  I have to comment on my phone, and that's not always the best way to type (most of my post typos are because they are written on my phone; most of the reason I embed tweets so much, too.  Anyway....), so I'm dropping this post here so I can comment on the Supreme Court case:

The concrete cross case?   I'd forgotten all about it.  Things are going to hell, there are more important things to do than think about atheist groups' publicity lawsuits.  I read the excerpts from RBG's dissent and can't disagree with anything she said in it but it's nothing I'm going to spend any time worrying about it.  Has it killed anyone in the 95 or so years the thing has been up?

I agree with the argument in Ginsburg's dissent, insofar as I've been able to find quotes from it (my Google-fu is weak):

“As I see it, when a cross is displayed on public property, the government may be presumed to endorse its religious content,” she wrote. “The venue is surely associated with the State; the symbol and its meaning are just as surely associated exclusively with Christianity.”

“The cross was never perceived as an appropriate headstone or memorial for Jewish soldiers and others who did not adhere to Christianity,” she added later, before giving a history lesson on the development of American cemeteries overseas during World War I.

Citing historical texts, Ginsburg noted that as a temporary measure, “Christian soldiers were buried beneath the cross; the graves of Jewish soldiers were marked by the Star of David,” she wrote.

When it came time to establish permanent headstones, there was considerable debate over whether to continue using religious symbols. Government officials had recommended “plain marble slabs” instead, Ginsburg wrote.

“Everyone involved in the dispute, however, saw the Latin cross as a Christian symbol, not as a universal or secular one,” she wrote. “Throughout the headstone debate, no one doubted that the Latin cross and the Star of David were sectarian grave markers, and therefore appropriate only for soldiers who adhered to those faiths.”


In fact, I want the cross preserved as a religious symbol.  I don't want government draining it of meaning by declaring it secular.  Of course, I don't want government draining faith in the God of Abraham of meaning by putting "In God We Trust" on the coinage, and calling it the "national motto."  That doesn't mean this decision is the beginning of the end of the republic as we know it.  Mark Stern at Slate, of course, goes off like a bottle rocket:  straight up and exploding, although only with a little "pop!".

The separation of church and state survived a close brush with death on Thursday, emerging scathed but alive thanks to a compromise decision that may not hold for long. Seven justices voted to allow a 94-year-old, 40-foot cross to remain on public land and those managing the cross to continue receiving state funding. But that lopsided vote conceals deep fractures among the justices over the government’s authority to honor and promote religion. The majority opinion portends more radical decisions to come while doing real damage to the establishment clause today, diminishing the state’s obligation to respect all faiths by endorsing none.*


That's rather ridiculous hyperbole, seeing as we still have "In God We Trust" on our coins, and it's considered the "national motto."  I don't like that, either; but the republic has survived despite it.  I don't like it, but I can live with it.  What's more interesting to me is Stern's analysis that the conservatives on the court want to undo the Lemon test (which the cross clearly, er...crosses), and despite the recent insistence of Justice Thomas that some precedents are "wrong" and must be disposed of now that there are the Justices to do it, the Lemon test is what Alito used.  And 7 Justices approved of his conclusion, if not of his reasoning.  Which puts this opinion in the realm of the Bakke decision, the case that set no clear grounds for affirmative action because the opinion of the Court was actually 8 different opinions.  Justice Sotomayor agreed with Justice Ginsburg, but the rest f the justices didn't really agree with Alito.  Kavanaugh, for example, declared Lemon dead because the Alito opinion didn't really apply it; Gorsuch pushed Lemon aside, too, but for different reasons.  Not a lot of guidance, in other words, that Lemon is dead

And if it is, it won't be long until the evangelicals so excited by Kavanaugh and Gorsuch are going to wish they had the yellow back.  Stern thinks the sky is falling and the wall is breached; it puts me more in mind of the old jingle we learned from MAD Magazine, one popular at the time for Pepsodent toothpaste, although not with these words:  "You'll wonder where the yellow went, when you brush your teeth with Pepsodent!  And when you're teeth start turning black, you'll wish you had the yellow back!"  Separation of church and state protects church from state.  I hope evangelicals don't find out they've forgotten that lesson, or the other one:  "Be careful what you wish for.  You might get it."

*I should also note the cross is older than the "wall of separation" metaphor first identified by Justice Douglas on the '60's on the Warren Court.  I think the metaphor is gonna be fine, whether or not Lemon continues to produce lemonade.