Acts of Paul and Thecla and other people.... 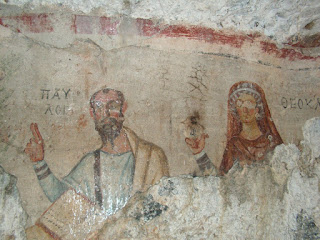 I love this idea that, if God said it, believers have to believe it.

Would that religious belief, or more specifically Christian belief, were that simple.

God said care for the poor, the widow and the orphan.  God said don't make war, turn the other cheek, do good to those who hate you, love those who revile you, think first of others and last of yourself; be servant to all and least of all.

Does that describe any Christian you know?

God did not say keep the woman quiet, and subservient, and insignificant, and oppressed, and unimportant, and unnoticed.  But many a male Christian (and no small number of females, at one time or another) is quite convinced that is the word of God.

It can be difficult to argue with people who think God said it and that settles it, but one can get into similar arguments over politics with people who no more connect religion to politics than Thomas Jefferson would.

Which is putting it to strongly in response to a too-strong generalization.  Religious belief does guide human behavior, but it doesn't control human behavior.  In the famous example of Paul and Thecla, you can see where the male figure and the female figure both have their hands raised in the same gesture of blessing.  Thecla's upraised fingers, however, have been burned away.  Did religion do that?  or culture?  If the former, why is she in the picture at all?

There is a rich vein of scholarship, already more than 20 years old when I was in seminary (and that was 20 years ago!), detailing the importance of women in the Biblical record, recovering their voices and noting where they had, like Thecla, been all but removed from the record.  Not quite removed, of course; and was the fault with religion, or with culture?  Did God decree women should be expurgated from the Biblical record, and people were just sloppy about it?  Or did people decide all those women were messing up their old boys network, and they were inefficient at removing all traces?

Can we know the dancer from the dance?  Perhaps.  Or perhaps we simply need to change the steps of the dance, and keep the music.