Nothing against the BSA, but.... 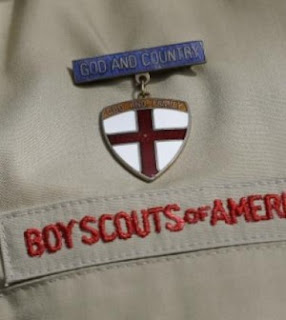 ...what I primarily remember from my brief tenure in the Boy Scouts of America, was learning to curse like a sailor.

All the swear words I know (with the exception of a few Shakespearean terms I picked up in college) I learned in the Boy Scouts.

And I never made it past "Tenderfoot."  Or whatever the starting level was; it was long ago, and I was hardly an enthusiastic adherent to the cause.

Not, in other words, exactly seeing a moral breakdown going on here.   What I remember of the BSA was that it was no better or worse an institution than any other I had been involved in up to that time, and other than using church buildings for meetings of the troop that weren't outdoors on campgrounds, I never thought of it was a particularly religious institution, either.  The churches had the space, after all; that seemed to be the long and short of it.

Not really seeing a problem of  bowing to the whims of the majority, either.

It's funny when the majority shifts, that suddenly the majority shouldn't rule. The entire "ethical" basis for not accepting the GLBT community as ordinary people was that the majority of the world had never done so.