Anarchy in the Hew Hess Hay 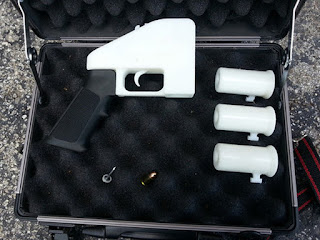 To hear the politicians tell it, this is the greatest existential threat to our existence since 9/11.


"This" being the latest thing, a "printable" gun.

But this story reminds me of the hippies of my youth, more than anything else.

is the dissolution of the U.S. government and governments around the world. He's an anarchist and a radical libertarian. And I think he sees this exercise of making a gun printable as kind of a demonstration of ways that the technology can circumvent the law, can circumvent -- to make the government irrelevant, until it just kind of disappears, or at least kind of he wants to carve out a kind of space where technology prevents the states' hands from controlling what people do.

First, Cody Wilson is a law school student at the University of Texas in Austin.  Yet he wants to dissolve governments.  After first taking full advantage of what they have to offer.  Including the internet, which was established by a government; and is maintained by power supplies made possible by governments; using industrial materials like plastics which are delivered to him through the good auspices of governments, which regulate or provide the means of access to plastics from the drilling rig that brings up the petroleum products to the refinery that turns that crude oil into something useful, to the chemical plants that render it into the plastics that make his gun "print," not to mention the mining concerns that produce the raw materials for the gunpowder, bullet casings, etc., etc., etc.  Oh, and the distribution systems that provide all those materials to Mr. Wilson, or you, or me; including but not limited to roads, police (to prevent theft), fire departments (to protect against hazards), and even public schools (to teach you how to develop things like plastic guns, or about the laws governing firearms) and public hospitals (to patch you together if the gun blows up in your face).

Oh, and at a quick glance, Cody Wilson both loves publicity, and first told his story to the BBC.  Yes, the government owned British Broadcasting Corporation.

In other words, Cody Wilson wants to destroy the very world that makes his printable gun possible, by printing a gun.

What a brave new world, that has such creatures in it.

Why does it remind me of the hippies?  Because they pretty much wanted to live in the world created before they were born without doing much more than taking advantage of the privileges given to them by the accident of their birth.

There weren't too many hippies born into poverty and rejoicing that they had not choice but to continue to live that way.  Not to bash hippies, but monks or the Amish they weren't.  No more than Cody Wilson is an anarchist.

He's just kind of an idiot.