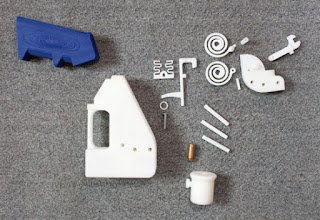 I had just come back from the court house for a docket call; a procedure in the county where lawyers announced their readiness to proceed with a hearing on a pending case.  I announced to the lawyers (I was still a student then) upon my return that one party in a case we were involved in had filed bankruptcy, and so the case had been "stayed."

It was such a new concept in Texas that the venerable lawyer (now a Federal judge himself) looked at me like a man a big tall tree had just fallen out of, and announced with great confidence that no Texas judge was gonna stop proceedings on a case just because somebody filed bankruptcy.  I told him it was the Federal law, and he brushed it aside like a pesky mosquito.  No Texas judge, he repeated firmly, was gonna stop a court case because of some obscure Federal statute.

But that was exactly what happened; and within a very short time that statue was no longer obscure.  Bankruptcies became so commonplace that lawyers worked it into their expectations of trial calendars.  Bankruptcy froze the case against the filing party, and effectively froze the entire case, because the trial court couldn't even sever the bankrupt party from the case without permission of the bankruptcy court.

This is the Supremacy Clause of the U.S Constitution in action.  And Texas survived that intrusion into its judicial system, just as it survived the imposition of Brown v. Board of Education in my childhood, when the "black" schools in my hometown were shut down just in time for me to enter an "integrated" school my first year of high school (17 years after Brown was handed down; justice is not always swift).

The race riot at the school was the next year.  More of a disturbance, actually; and an excuse to leave the campus early, with my girlfriend (now my wife) and my other friends.  Not even a reason to call out the National Guard.

Thus do federalism and state government work hand in hand; or sometimes, in spite of each other.

No Texas governor ever stood in the schoolhouse door, or, to my memory, denounced the Brown decision or the Civil Rights Act or even the Voting Rights Act.  That's all much more recent history.  But now the Texas House has decided to trump all efforts by any state entity to enforce federal law when it comes to our federally guaranteed (!) right to keep and bear arms.

Which ain't as guaranteed as all that, after all.  My one and only appearance in Federal Court was as an appointed lawyer for a defendant accused of possession of a firearm.  Problem was, he was a felon.  Interestingly, felons don't lost their 1st, 3rd, 4th, or 5th amendment rights; or their 14th amendment rights to due process and equal protection even of state laws.  But they do lose their 2nd Amendment rights, and this man had lost his. (and so a note to State Rep. Steven Toth; "shall not be infringed" doesn't mean what you think it means).  "Possession," by the way, is a looser term than you might imagine.  He didn't have the gun in his hands or even within reach; and he didn't even claim it was his (a point of great confusion for him).  It was in the package tray of the car he was driving, when he was stopped.  And yes, they made a federal case out of it, which even at the time struck me as using a sledge hammer to swat a flea.

But it was an enforcement of federal law on a 2nd amendment issue; or not.  No one saw a 2nd amendment problem there, nor an overreach and violation of state law by the federal government.  (The fact that the 2nd amendment applies to the states at all works only because of the 14th amendment; and that the states can in any way pass laws about firearms is possible only because of interpretations of the 2nd and 14th amendments that allow such things.  This is very much what I mean, elsewhere, about a "Big Idea."  There is nothing remotely rational or even legal/Constitutional in the bills the Texas House has passed.  They are rampant absurdities, legal inanities, based on no more understanding of Constitutional law than the idea that the Constitution guarantees a right to "life, liberty, and the pursuit of happiness." Nor are these bills, if they become law, likely to be upheld by many state judges, who generally know better.  But gun "rights" are sacrosanct, so no reasoning is necessary; only the fervent defense of the irrational position.),

Which leaves me wondering:  does the Lege want to allow felons to own guns, in defiance of federal law?  How about drugs?  Can we have those, too?  And isn't immigration a federal issue?  Can't we just ignore that, and make life easier on the border?

Or is it only guns that have inviolable rights?