"CLEAN UP ON AISLE SIX!" 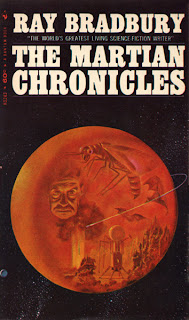 I started the day that first produced this post a little disappointed.

This review of the stories of Ray Bradbury, for example, is frankly so blinkered and generationally bound ("Bradbury also loved to write about the end of the world.  It was, perhaps, a natural outgrowth of the era during which he wrote, when human eradication had become very much possible."  Possible?  C'mere, punk, and lemme tell ya about somethin' called "The Cold War."  Fallout shelters.  Duck 'n' cover.  Possible?  How about "Probable"?.  Now get off mah lawn!) that I find it a bit hard to take.  Alyssa liked it, but I often find Alyssa a bit hard to take.

Opinions vary.  YMMV.  Your favorite anything sux.  And so on.

The other thing bothering me is this completely lame review of the latest episode of "Mad Men."  I'm sure there are much more lucid and enlightening comments out there than this one at Slate, but in the fine internet tradition of finding one voice you disagree with and then slamming that opinion as mercilessly as our metaphors treat dead horses, let me say this brief summary doesn't even to the plot justice.  Did no one notice that Betty did to Don what Don has been doing to women throughout the entire series?  That Don, who we now know grew up in a whorehouse and learned to treat women as vessels for sexual pleasure and bodily fluids, has finally been treated like a sex object by his ex-wife Betty, the Ice Princess?  That she tossed him aside like a Kleenex, and let him know she knew he knew she knew what she'd done, all with a look, the next morning as she brushed him off with the least polite greeting she needed?

And what of Peggy, the woman who wants to be (in late 60's America) a man?  No, not a transvestite, but a fully autonomous human being?  Who screwed Pete because she wanted to, had a baby she never told him about and abandoned to her mother's care, and lately has taken up with Abe, the would-be radical for whom she bought an apartment building in the wrong part of town.  Abe who abjures what Peggy does, but gladly takes her money so he can live out his dream of identifying with "the people," even when "the people" stab him at the subway in an attempted robbery (and we all begin to remember how New York City got it's latest reputation for being a crime-ridden warren of rats and snakes with these story lines, and the endless sirens going off on the streets below Don's "safe" apartment (don't get me started on the con artist who fooled Sally while all the adults were away doing "adult" things).  Will no one notice Peggy stabbed Abe with perhaps the most obvious phallic symbol in recent television?  Will no one notice Abe was acting like the stereotypical female ("Can't we all just get along?  Can't we just talk about it and understand?"; not not actual quotes; but actually the way Abe has been behaving) while Peggy learns to be more adult and rational than Don who competes with Ted by drinking him under the table, and Ted who flies his own plane and makes Don feel insignificant against that simple fact)?  Will no one notice Peggy has been pursuing Ted, who responds by coming unstuck and behaving like...well, a girl?  (Yes, I know that sounds uncommonly sexist, but in the culture of America in the '60's as portrayed in this show, Ted is clearly a wimp.)  Usually man enters woman (the whole point of a phallic symbol), but when Peggy wheels around at the noise inside her apartment, following the noise from outside her apartment, she enters Abe; and right in the belly.  She doesn't castrate him, but she doesn't have to; he's pretty much done that himself (again, in 1960's terms; Abe makes the obsequious Bob at Sterling Cooper, et al., look like a mensch).  She enters him, and the results are not pretty; but they are illuminating.

Well, they are to me.  Maybe I'm just a product of too much pseudo-Freudian analysis in literary criticism in my formative years.

Speaking of formative years, let me start with full disclosure about the work of Ray Bradbury:  I grew up on it.  I grew up buying every copy of his books I could find, especially the bizarrely lurid covers of the Bantam editions, every one proclaiming him "The World's Greatest Living Science Fiction Writer."  The covers all reflected the same style, from the huge naked man covered with tattoos sitting on a makeshift wooden platform in some desert locale for The Illustrated Man (against a strikingly red sky) to the red planet floating on a black background, covered with faces and figures for The Martian Chronicles, even to the large clock filled with snakes and scarecrows and other figures, again in that desert locale, for Timeless Stories for Today and Tomorrow which Bradbury merely edited.  I searched those books out when I was 11, 12, 13, finding them not in bookstores (did such places exist?  One did, in my town, and I eventually worked there) but in grocery stores and drug stores where  Bradbury's books always appeared on wire stands  much like comic books did.  I scoured those rotating stands for that cover art, looking for the next one to fill out my collection.

I still have them all, plus many hardbacks accumulated over the years.  So I am, above all and going back for decades, a Bradbury fanatic.  I've been reading him since before Todd VanDerWerff was a gleam in his father's eye, since before Mr. VanDerWerff first knew he was living in Aurora, South Dakota.

So wise up, punk.

Ray Bradbury wrote about more topics and ideas than any other writer I've encountered.  He didn't create a fictional world or resurrect a real one from memory and maps, although he certainly preferred certain leitmotifs:  he loved the horror stories of Poe, and wrote some of his own equally as good.  He wrote brilliant fantasies, from men creating cocoons around themselves to malevolent mushrooms in basements to the wonderful stories (and one novel!) about the Family.  He was often more poet than not (something Mr. VanDerWerff only gets close to mentioning by damning Bradbury's gift for description with faint praise), and his talents ranged from the fictional Green Town, Illinois (okay, he did create a fictional world; but he hardly limited himself to it) to the streets of Los Angeles, Dublin, Ireland, cities of Mars, and where ever all those stories in the Illustrated Man took place.

He was brilliant, stupid, ignorant, insightful, playful, powerful, weak, talented, simplistic, bombastic, eloquent, and marvelous.  He was also, on occasion, disappointing.  Go and please the world.

As for that "Mad Men" episode, Peggy stabbing Abe is illuminating if only because it causes Abe to confess to Peggy (pain killers?  shock? delirium?) that he can't stand what she does.  Her work, he means?  The income that gave him the apartment building in the part of the city he wanted to live in?  Or, perhaps, her personal behavior?  Her strength, her assertiveness; her, dare we say it, feminism? That phallic symbol again....

And Don, finally treated by a woman the way he's been treating women for, what is it, six seasons now?, was just as emasculating as Peggy stabbing her boyfriend with a ten-foot pole (not quite that long, but the metaphor is apt).  When he returns to his wife, it's not as a broken man or a repentant man or even a sadder but wiser man.  Rumors are flying that he returns to a wife slated to die a la Sharon Tate (and the resemblance of the two is stronger than I realized; for some reason I remembered Sharon Tate as a blond.  And yes, I did work that into the discussion for the purposes of being gratuitous; why do you ask?  Besides, it reminds us that Esquire was much racier back in the day.  Ah, yes, I remember it well.....).  I give no credence to those rumors, but I find it interesting that Don admits he hasn't "been there" for her; or rather, he just admits he hasn't been there, which begs the question:  when has he ever been anywhere, except in the limbo he's tried to live in since leaving his non-wife, the widow of the real Don Draper, and marrying Betty?

But that's another matter....

The only point is, some works of art deserve better critics than they get, much as culture itself deserves a better understanding than it usually gets.  Katha Pollit's comments on religion are a case in point:  she wants to blame either individual psychology or some subset of society (religion, in this case) for some set of perceived evils in the world.  The usual reasoning is:  extirpate this source root and branch, and life as we know it will improve.  It's thinking not far removed from that of the principals of "Mad Men:"  attain the right relationship (Don's flight from his non-wife, the real Mrs. Draper, to Betty, to Megan, with various affairs in between and all around) acquire enough clients and accounts, get (in the case of Pete, most recently) the right house in the 'burbs, or the right apartment in town, achieve enlightenment via LSD (Roger), and all will be well and all manner of thing will be well.

Except, of course, it isn't.  Now shift that relentless pursuit to understanding:  plunge to the bottom, to the root cause, and finally you will have something!  Except you have to locate that root cause correctly:  the psychology of the individual was a very popular answer for a century or more; now we blame religion, or politics, or other people's politics (nothing really new in any of this).  What we never blame is culture; mostly because culture really is the water we are floating in.  Ultimately we can no more reject it than we can stop breathing air.  Much easier to blame a subset:  religion, politics, what have you; that we think we can then discard, and solve the problem.  So we'll fix the issue by slicing off all that makes religion seem important to us:  we can have ethics without it (yes; it's called "The Nichomachean Ethics."  But it doesn't go quite as far as John Rawl's theory of justice, and his argument was for social order and public policy, not interpersonal relationships).  Then we'll discern unappealing attitudes (sexism, patriarchy, etc.) in religion, and decide that is where such attitudes are rooted.  And when they aren't, we'll root them in individual psyches, or in undesirable sub-cultures ("rednecks," "hillbillies," "coon-asses" in southern Louisiana, "crackers," "white trash," "Tea Partiers."  We never run out of groups to blame and despise, and so keep ourselves "pure.")

I mean, after all, those people are obsessed with funny things that don't bother us now, so why should we try to learn about them, or even from them?  Let's just slap a label on them, and move on.  Sort of the way Don Draper labels women as convenient or inconvenient whores. Which is a matter of his psychological development; but is also a matter of the culture he swims like a shark in.

Although at least he doesn't take a lovely, simple screed and drive it right into the ground.

Better critics, please; and this blog could use an editor.