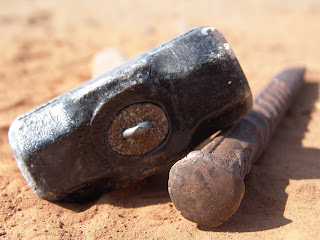 In which I take a lovely, simple melody (a/k/a a perfectly reasonable observation), and drive it right into the ground (musical accompaniment by Leo Kottke):

Indeed, Mr. Sagan's argument was, and the argument still is, that of a man with a hammer, to whom the whole world resembles a nail. The Bible is no more meant to be the answer to all things (i.e., truly cosmological) than science is; but once you make that mistake, as many do on either side of the question, then you tumble down the rabbit hole into arguments with Mr. Sagan.

I know I tend to lean to far toward Gould and non-overlapping magisteria to your tastes, but obviously (given your making of this statement) you have to agree 100% with Gould to agree with the position stated above.


Not really.  Here is Gould on NOMA in a nutshell:

Religion is too important to too many people for any dismissal or denigration of the comfort still sought by many folks from theology. I may, for example, privately suspect that papal insistence on divine infusion of the soul represents a sop to our fears, a device for maintaining a belief in human superiority within an evolutionary world offering no privileged position to any creature. But I also know that souls represent a subject outside the magisterium of science. My world cannot prove or disprove such a notion, and the concept of souls cannot threaten or impact my domain. Moreover, while I cannot personally accept the Catholic view of souls, I surely honor the metaphorical value of such a concept both for grounding moral discussion and for expressing what we most value about human potentiality: our decency, care, and all the ethical and intellectual struggles that the evolution of consciousness imposed upon us.

Religion, IOW, is okay for those as likes it, so long as they keep it to themselves and at least tacitly acknowledge the supremacy of empiricism (i.e., "Science") to provide the real understanding of all things (like, say, "mind" (psychology) or humanity (anthropology), and stick with things science stopped giving a wet snap about sometime around the Enligthtenment (the soul, for example). So, we can't get rid of religion; might as well treat it like the red-headed stepchild.

Which is not something I would agree with, at all.

I can declare a complete disinterest in the empirical world without declaring a complete disinterest in the world.  Which is more important to my life:  that I know my wife loves me, or that I know how my car operates?  My knowledge of my wife's love is not based on empirical evidence.  If it were, it would be, as David Hume pointed out, a mere fact among facts, no more important to me than the weight of a particular stone.  But it is far more important to me than how my car operates.  For one to fail would be an inconvenience; for the other to fail, for me to be completely wrong in that knowledge, would utterly change my life in ways no mechanic (or hospital, if my failure is my knowledge of how to drive safely) could repair.

Are these non-overlapping magisteria?

Are these non-overlapping magisteria?  Or is this Rome letting the children of Abraham in Judea have their god and their Temple and their rituals, so long as that Passover event doesn't get out of hand (and the walls of the Governor's Palace provide a vantage point for watching the rabble in the Temple courtyard that once a year)?

I really don't see that the late Mr. Gould's idea is all that distant from the Scientism of the late Mr. Sagan. I can disregard them both with out dismissing modern science or my religious faith.*


*Funny and perhaps unimportant anecdote:  Science Friday today featured a Nobel-prize winning physicist (Saul Perlmutter) who tried to explain the Big Bang as being a point when there was no space between all the matter in the universe, but the universe was still infinite.  He pointed out the problem was not accepting this image, but accepting the idea of infinity, which he finally had to explain in terms that sounded very much like the usual explanation of the Christian Trinity:  it's a mystery you can't understand, but you have to start there to understand everything else about, well, Christianity or cosmology, apparently.  No one, in other words, can "understand" infinity; they just have to accept the concept to understand everything else science says about the cosmos.