"Find the cost of freedom/buried in the ground...." 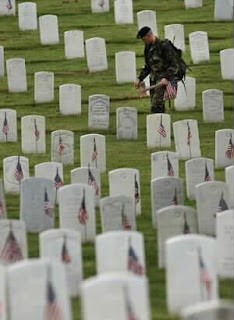 I wasn't thinking of these words earlier, but it's as good a start place as any:

I've seen my country gradually adopting an official style of memorializing those who fought in wars called by our politicians that is more suited to a dictatorship.   A mix of dishonest sentimentality, hypocritical piety, falsified history and the most vulgar, cloying and putrid of Hollywood-Las Vegas styled patrieroticism for clearly bad motives.  It is a propaganda ploy for the military industrial complex, it is PR for the ruling oligarchy whose use for cannon fodder is one of its few remaining uses for the people of the United States.  It's gotten far worse in the past thirty five years, especially since Ronald Reagan was promoted to the presidency by the media which then genuflected to him and the unofficial illegal wars he engaged in.   It was another actual veteran of the Second World War who I heard lament that with Reagan in Central America, the United States had devolved into a terror state.

Freedom, I was thinking, is not free.  And we know it isn't free because we have to get someone else to purchase it for us.   That, at least, is the thinking now.  WWII, we are now told, was fought so we could be free.  It was the cost of freedom, to fight that war.

We fought that war because Japan attacked Pearl Harbor.  We ignored Hitler's invasion of Poland, and then France, and even the attacks on Britain.  Not our fight, we declared.  We happily stayed out, and the best FDR could get was Lend/Lease.  Then came December 7, 1941; a date that will live in infamy.

I like watching war movies made during and after that war.  I saw a lot of them yesterday.  In "Battleground," the best of the "Battle of the Bulge" movies, a chaplain tries to explain to the soldiers in Belgium why they are there, trying to defeat Hitler.  He never once mentions "freedom,"  Mostly, he talks about how many people the Germans wanted to kill; and that was the reason the Germans had to be stopped.  In the other great war film, "The Best Years of Our Lives," there is only one discussion about the just ended war, and it comes from a man who sounds like a Tea Partier today.  He insists the war should have been fought against "the Limeys and the Commies," that Pearl Harbor was a false flag operation, and that we're still going to have to fight the "real enemy."

If anyone thought Alex Jones was sui generis, let all such thoughts end now.

That guy ends up getting punched in the nose, but no counter-argument to his diatribe is offered; no flowery speeches about freedom not being free, or even being a reason for that war, are offered.  The fact is, the US never felt threatened in that war.  It felt cheated by the attack on Pearl Harbor; aggrieved by the unprovoked attack, but not threatened; not the way Hitler threatened Britain, anyway.

So freedom is not free.  But you gain it by getting somebody else to die for your freedom.  That's the only way it works.  You don't gain it by dying yourself; what good is freedom to you then?  You don't gain it by simply being free and leaving others alone (the stance of the US before Pearl Harbor).  You gain it by taking someone else's life.  Your freedom is your ability to be free to kill people you think inhibit your freedom; and preferably to do that by getting someone else to do that killing because, after all, in war people die, and dead people have no freedom.

So freedom is not free; someone else has to pay for it.

Doesn't make sense, does it?

In all of the Declaration of Independence, the word "freedom" does not appear.  Jefferson didn't write an appeal to the idea that freedom is not free, that someone would have to die so the rest of the colonists could have freedom.  He writes a comprehensive catalog of complaints about the oppression of the British crown, but he never justifies freedom as being won by military means.  He doesn't even mention freedom.  He only mentions liberty once.

Freedom, in other words, is not foundational to our government.  Even the Bill of Rights doesn't guarantee "freedom of speech."  It just says "Congress shall make no law...."  Until the passage of the 14th Amendment, that Bill of Rights was read as a limitation on the federal government only.  The states were perfectly free to repress the press or establish a state religion or silence dissent or deny the people the choice to peaceably assemble.  The 1st amendment didn't mean "freedom of speech," it meant the Congress couldn't restrict your speech; and that's all it meant.

Freedom is not free; but it wasn't bought with blood on the battlefields of the Civil War.  It came from a constitutional amendment.  It came from the political process.  It came after Lincoln was dead.

Freedom is, in fact, free.  Your liberty can be taken from you; but your freedom?  Did you fight to have it in the first place?  Does anyone have to fight to be free?  No; not if freedom is a state of mind, not a worldly possession.  Worldly possessions are not free; they all cost you something.  But sell them all to buy the pearl of great price, and what have you purchased?