"Please to be shutting the pie-hole now" 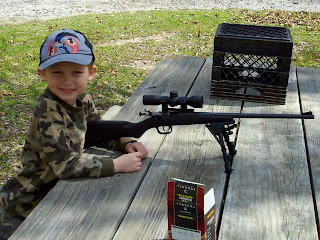 Well, you knew somebody had to say it:

“Why single out firearms? Why not talk about all the other things that endanger children, too?” [State Rep. Robert R. Damron] said. “The Second Amendment doesn’t give anybody carte blanche freedom to put children and juveniles at risk.”

There is a grain of truth in what  Rep. Damron says:  the 2nd amendment gives you a right to bear arms (according to the Supremes); it doesn't give you a right to use them, though.

But let's take him up on his idea, and consider all the other things that endanger children, too.  10 inch chef's knives, for example.  Or, since this is rural America we're talking about, "hunting and shooting and sport fishing," which all "starts at an early age" (though I don't remember being at risk of killing my little brother with a Zebco rod and reel), how about a deer skinning knife?  I have a Buck knife from high school, with a blade sharp enough to cut open a deer (it never has).  Is it okay to give one of those to a four year old?

How about a machete?  A long, two pronged fork, perfect for inserting into electrical outlets?  Should a kid have one of those of his very own, so he can learn to barbecue just like Poppa?

We don't give a knife to a five year old because the purpose of a knife is to cut things, and 5 year olds don't have the cognitive ability to recognize the dangers of a sharp blade.  Even used as it was designed to be used, a knife will inflict significant damage and we understand that to let small children have access to them is to endanger them.  To tell a child this knife, be it a Buck knife or a chef's knife, is for him, is a form of child abuse.  We would take children out of any such home without a second thought; and we should.

But this is a gun, so it's okay?  This gun did precisely what it was designed to do.  It fired a bullet when the trigger was pulled.  It didn't malfunction and it wasn't misused, except in the sense that the misuse was leaving it where the child could get to it.  The first rule of gun safety (I know this and have never owned a gun in my life) is that all guns are loaded, whether you just unloaded it or not.  This is why you never point a gun at something you don't mean to shoot; because of the risk that you will, when you didn't mean to.

Who in their right mind thinks a 5 year old understands that?  And in what moral universe do we allow such guns to be marketed to children, or defend the possession of such guns for and by children, because other things are dangerous, too?

Charlie Pierce thought this was the worst quote of the day:

"It's a normal way of life. I mean, folks - and it's not just rural Kentucky, it's rural America. I mean folks hunting and fishing, it's sports shooting - it's just a way of life. You know, you begin at an early age, learning to use and respect a gun," said Joe Phelps, Cumberland County Judge Executive, whose position has been described as similar to that of a local mayor.


I think Rep. Damron tops it.  And I adopt the remainder of Mr. Pierce's post and incorporate his words herein as my own, as well:

Up with this, I no longer have to put. If your "way of life" involves handing deadly weapons to five-year olds, your way of life is completely screwed up and you should change it immediately because it is stupid and wrong. (And, again, also, too: goddammit, "learning to use and respect a gun" means at least knowing that the fking thing is loaded when it's sitting in the corner of the parlor like it's a damn umbrella stand or something, and we should talk about that part, too.) It is not in any way "normal" to hand a kindergartner a firearm. If a mother from the inner-city of, say, Philadelphia did that, and the kid subsequently shot his sister to death, Fox News never would stop yelling about the crisis in African American communities and the Culture Of Death, and rap music, too. If your culture is telling you that children who have only recently emerged from toddlerhood should have their own guns, then your culture is deadly and dangerous and that should concern you, too. If your culture demands that, in the face of a general national outrage over the killing of other children, your politics work to loosen the gun laws you have, as they apparently did in Kentucky, then your culture is making your politics stupid and wrong and you should change them, too. I do not have to understand these people any more, and it is way too early in the day to be drinking this much.

This gun fetishization has to stop.  "Thou shalt have no other gods before me" applies to the Second Amendment, too.

Update:  as Lawrence O'Donnell points out, neither does anyone market knives or long forks or other dangerous objects to 5 year olds.  But the makers of the Crickett gun do:

And there is something profoundly wrong with that.