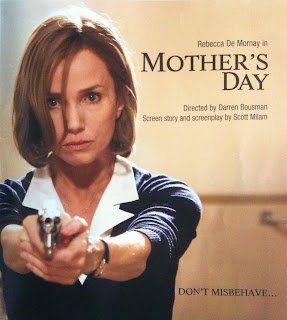 So I came across this about today (although it's 3 years old):

I hate the way the holiday makes all non-mothers, and the daughters of dead mothers, and the mothers of dead or severely damaged children, feel the deepest kind of grief and failure. The non-mothers must sit in their churches, temples, mosques, recovery rooms and pretend to feel good about the day while they are excluded from a holiday that benefits no one but Hallmark and See’s. There is no refuge — not at the horse races, movies, malls, museums. Even the turn-off-your-cellphone announcer is going to open by saying, “Happy Mother’s Day!” You could always hide in a nice seedy bar, I suppose. Or an ER.

And my first thought was how uncomfortable I was folding "Mother's Day" into the worship service on that Sunday morning in May.  It wasn't as bad as "Scout Sunday," when the colors were trooped down the main aisle of the nave and everyone all but saluted (false idols!).  It was worse than Father's Day, which wasn't much fun either (and, full disclosure, I actively dissuade my daughter from observing Father's Day in my own home; I always have, I always will.  I am not worthy.)

Mostly I didn't like it because it had no place on the liturgical calendar, and no real place in liturgical worship.  I wasn't a purist about worship, but worship is for contemplating and praising and seeking the presence of, God.  And Mother's Day is for...well, Hallmark and See's.

And it's not for people who aren't mothers; or who lost children in childbirth; or whose own mothers were horrors out of a badly written Gothic novel.  And no, that's not an idle statement:  I had a church member in the church I served as a student pastor whose history of family abuse made her not want to call God "Father," as in "Our Father, who art in heaven."  And I couldn't exactly disagree with her.

Not that the rest of us have to "suffer" because of one such unfortunate individual history; but then, excluding Mother's or Father's Day from the worship service isn't exactly my idea of suffering.  We don't have to put it on the back of someone else; we can just say it really has no place in public worship, and give people who do feel excluded on the day (especially from restaurants.  We took the Lovely Wife to lunch on Mother's Day once, a long time ago; we've never made the same mistake again.) a place to feel comfortably included.

Which, after all, is the purpose of the church; at least, in my ecclesiology.  I know that means welcoming the unbaptized and the unrepentant, and maybe even the unbelieving, but...so be it.

Here's hoping you don't feel the need to hide from the day, and that you understand those who might wish to.  And above all: don't misbehave!

Let me sharpen the irony by using this pre-publication update to note the history of Mother's Day, per Diana Butler Bass:

In May 1907, Anna Jarvis, a member of a Methodist congregation in Grafton, West Virginia, passed out 500 white carnations in church to commemorate the life of her mother. One year later, the same Methodist church created a special service to honor mothers. Many progressive and liberal Christian organizations--like the YMCA and the World Sunday School Association--picked up the cause and lobbied Congress to make Mother's Day a national holiday. And, in 1914, Democratic President Woodrow Wilson made it official and signed Mother's Day into law. Thus began the modern celebration of Mother's Day in the United States.

For some years, radical Protestant women had been agitating for a national Mother's Day hoping that it would further a progressive political agenda that favored issues related to women's lives. In the late 19th century, Julia Ward Howe (better know for the "Battle Hymn of the Republic") expressed this hope in her 1870 prose-poem, "A Mother's Day Proclamation" calling women to pacifism and political resistance....

Now, if we could use Mother's Day for that purpose, or to further the kind of social justice Ann Jarvis favored:

...Anna Reeves Jarvis organized poor women in West Virginia into "Mothers' Work Day Clubs" to raise the issue of clean water and sanitation in relation to the lives of women and children. She also worked for universal access to medicine for the poor. Reeves Jarvis was also a pacifist who served both sides in the Civil War by working for camp sanitation and medical care for soldiers of the North and the South.

That would be an observance worthy of a church service.  But I can do without the hearts and flowers and schmaltz, thank you very much.