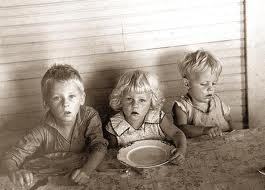 Courtesy of Southern Beale comes the full story behind this bit of nonsense:

Rep. Stephen Fincher, R-Tenn., then quoted a verse from the 26th chapter of Matthew, saying the “poor will always be with us” in his defense of cuts to the food stamps program.   Fincher said obligations to take care of the poor should be left to churches, not the government.

I actually heard that same argument from a man I admired (still did, afterwards; it's possible to admire people and know they are wrong about something), and even then (in college, lo these many feckless years ago), I knew the argument was as hollow as a clapper-less bell.

While Jesus was in Bethany at the house of Simon the leper, a woman who had an alabaster jar of very expensive myrrh came up to him and poured it over his head while he was reclining (at table).  When they saw this the disciples were annoyed, and said, "What good purpose is served by this waste?  After all, she could have sold it for a good price and given (the money) to the poor."

But Jesus saw through (their complaint) and said to them, "Why are you bothering this woman?  After all, she has done me a courtesy.  Remember, there will always be poor around; but I won't always be around.  After all, by pouring this myrrh on my body she has made me ready for burial.  So help me, wherever this good news is announced in all the world, what she has done will be told in memory of her. (Matthew 26:6-13, SV)

So the admonition is not to leave the poor to another time, or another responsibility, or even to ignore them.  And to add a bit more context to this, Matthew 25:

When the son of Adam comes in his glory, accompanied by all his messengers, then he will occupy his glorious throne.  Then all peoples will be assembled before him, and he will separate them into groups, much  as a shepherd separates sheep from goats.  He'll place the sheep to his right and the goats to his left. Then the king will say to those at his right, 'Come, you who have the blessing of my Father, inherit the domain prepared for you from the foundation of the world.  You may remember, I was hungry and you gave me something to eat; I was thirsty and you gave me something to drink; I was a foreigner and you showed me hospitality; I was naked and you clothed me; I was ill and you visited  me; I was in prison and you came to see me.'

Then the righteous will say to him, 'Lord, when did we see you hungry and gave feed you or thirsty and give you a drink? When did we notice that you were a foreigner and extend hospitality to you?  Or naked and clothed you? When did we find you ill or in prison and come to visit you?'

And the king will respond to them, 'I swear to you, whatever you did for the most inconspicuous members of my family, you did for me as well.'

Next he will say to those at his left, 'You, condemned to the everlasting fire prepared for the devil and his messengers, get away from me!  You too may remember, I was hungry and you didn't give me anything to eat; I was thirsty and you refused me a drink; I was a foreigner and you failed to extend hospitality to me; naked and you didn't clothe me; ill and in prison and you didn't visit me.'

Then they will give him a similar reply: 'Lord, when did we notice that you were hungry or thirsty or a foreigner or naked or ill or in prison, and did not attempt to help you?'


Am I my brother's, and my sister's, keeper?  The answer is very clear.  I am.  Is the church my brother's and sister's keeper?  Perhaps.  That's a matter for ecclesiology.  Jesus doesn't put the burden on any institution (especially since the line between church and state didn't exist in his day).  But he doesn't let us off the hook, either; in either of these nearly back-to-back passages from the same gospel.  He also, however, doesn't exclude government from doing the job.  Jesus, after all, would not have challenged the words of Jeremiah:

Woe to him who says,
"I shall build myself a spacious palace
with airy roof chambers and
windows set in it.
It will be paneled with cedar
and painted with vermilion."
Though your cedar is so splendid,
does that prove you a king?
Think of your father: he ate and drank,
dealt justly and fairly; all went well with him.
He upheld the cause of the lowly and poor;
then all was well.
Did not this show he knew me? says the Lord.
But your eyes and your heart are set on naught but gain, set only on the innocent blood you can shed,
on the cruel acts of tyranny you perpetrate.  (Jeremiah 22: 14-17 (REB))

This could end up worse than leaving everything to the 50 states; there's even less coordination between houses of worship than there is between those "laboratories of democracy."

No, the whole idea is an absurdity, and Rep. Fincher is an ass.  He wants to deny responsibility for the most inconspicuous members of God's family, while claiming a privileged place for himself and his own in God's favor.

Southern Beale will enlighten you further on what kind of hypocrite he is.  I just wanted to point out he's not entitled to his own Bible, either.