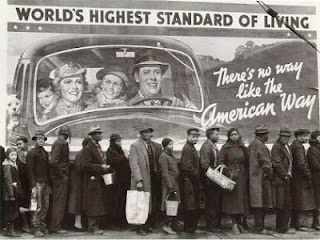 According to the International Human Rights Clinic of NYU Law School, the four biggest food assistance programs fall short for as many as 50 million food insecure households. Eligibility requirements are already so strict that one in four households classified as food insecure were still considered too high-income to receive benefits from the Supplemental Nutrition Assistance Program (SNAP). Even families considered poor enough for food aid only get a pittance that runs out quickly; for instance, the maximum benefit for a family of four is $668 a month, or a little under $2 per meal for each family member.

To demonstrate the impossibility of surviving on food stamps, Sen. Chris Murphy (D-CT) recently spent a week eating on $4.80 a day, mainly consuming ramen noodles, a peanut butter and jelly sandwich, and a banana. “I’m hungry for five days…I lost six pounds in four days,” Murphy said upon concluding the experiment. He also realized that nutritious food and produce was far, far out of reach for people living on SNAP benefits. Indeed, obesity and related diseases are common among SNAP recipients who simply can’t afford nutritious food.

As a result, many families can no longer rely on these benefits. Instead, they increasingly have no choice but to turn to emergency food pantries run by charities. In the wake of the financial crisis, 37 million people relied on these emergency food providers — a 46 percent increase from 2005. These charities, many of which took devastating funding hits in the recession, are struggling to accommodate the influx of needy people who are supposed to be covered by government programs. As for the recipients themselves, the stigma against hungry people has made many people feel humiliated to turn to these programs.

Republicans looking to cut SNAP and other safety net programs have painted recipients as perpetually unemployed people who have become “dependent” on the government because it’s easier than getting a job. In fact, more than 80 percent of families receiving SNAP include a working adult. Despite the stigma, the reality is that the many low-income or part-time jobs available to these Americans simply do not pay enough to sustain a family’s survival. Most of the remainder of SNAP recipients are disabled or elderly and cannot work.

Just a reminder:  the programs FDR put in place to help the unemployed during the '30's were not universally acknowledged as the salvation of America.  WPA was ridiculed as "We Piddle Around," because, you know, government doesn't create jobs.  The CCC wasn't honored as a valuable source of human pride and noble effort, although I enjoyed the use of a lot of buildings growing up in East Texas that bore the distinctive character of WPA and CCC projects; and that was almost 30 years after some of them were built.

80 years later, some of those buildings are still functional.

So the complaint that unemployed people have become dependent on government largesse is hardly a new one.  Look to the stories from the gospels; before governments took responsibility for their citizens well-being, people wondered why anything should be done for the poor.

Which is why we will always have the poor with us.