Makes all the people in the temple shout! 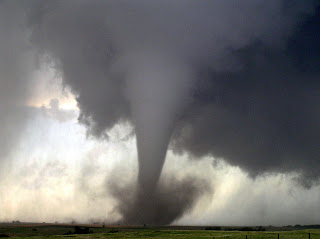 There is, unfortunately, no text version of this story, so I have to type rapidly as it plays on my computer.  The speaker is the City Manager of Moore, Oklahoma, a man who really shouldn't be allowed near a microphone again.

Mayor Lewis said the city should mandate storm shelters in new home construction.  The City Manager responded:  "Obviously the council will decide that.  We've had this discussion after every tornado that comes along, and haven't done it yet.  We're a pretty independent lot around here in terms of tell me what I have to do and what I don't have to do.  Home builders--we have lots and lots of homes built here--home builders are influential."

And as for shelters in schools:  "Lives...you can't count the value or the cost of lives. But you can count the cost of construction.  It adds a significant amount of cost to construction; the taxpayers would have to determine whether they're going to pay that or not."

I've listened to it several times now, and it's slightly less shocking than the first time I heard it; but only slightly.  What he says here, in essence, is that money talks.

But there is this fact: Moore has had four major tornadoes in 15 years, two of them EF5 tornadoes. One wonders if the insurance companies are going to want to have a say in construction practices in Moore, and what structures they will insure, and what they won't insure.  And when you put the interests of home builders ahead of the interests of residents, well, one wonders just why the city of Moore exists in the first place.

I hope there is some change of heart in Moore after this.  I know there are smaller cities in Oklahoma with public shelters, some of them decades old and still in use; some built with FEMA funding.  If Moore insists on being so independent it can't provide shelters or require them in homes and schools, perhaps we as a nation have to be independent, too.

Except, of course, that is foolishness, and error compounding error.  And besides:  the children have no say in the cost of construction or the price of safety.  They trust us to keep them safe.  Is the City Manager of Moore, Oklahoma, really saying that the responsibility to keep the children in our care safe, in public buildings if not in private ones, is overridden by the cost of providing that safety?

I like to think the people of Oklahoma, and of Moore, are smarter and more compassionate than that.

This idea of "why should we make people safe?" is not limited to the city manager of Moore; Sen. Coburn has the same blinkered reaction:

When asked if he thought the government should take steps to mandate tornado shelters in the aftermath of the storm, Coburn rejected the idea by using a classic statistical fallacy.

"If you're living in that area of Moore in Oklahoma, the likelihood of being hit by another tornado is about zero in terms of odds," he said.


Which explains why Moore has been hit by four tornadoes in 15 years, and two of them EF5's.  (The city of Moore engages in the same gambler's fallacy on their website, arguing there is only a 1% chance of another storm like the one in 1999.  Which doesn't mean what they think it meant.)  Maybe you don't do what Joplin, Missouri did, and put in standards for new construction like hurricane clips and tie downs (although, considering everything in Moore has to be built from scratch, why not?), or require each home to have a shelter (again, why not?).  But what's so unreasonable about building community shelters in easy to walk to locations? And requiring shelter rooms in the new schools that will have to be built?

Then again, this is who we're talking about:

Woman: Senator Coburn we need help. My husband has traumatic head injury. His insurance will not cover him to eat and drink. And what I need to know is, are you going to help him, where he can eat and drink? We left the nursing home and they told us we're on our own. He left with a feeding tube. I've been working with him, but I'm not a speech pathologist, a professional, that takes six years for a Masters, and I've tried to get him to eat and drink again and it's been so much - (cries)

Coburn: Well I think think personally, yeah we'll help. The first thing we'll do is see what we can do individually to help you, through our office. But the other thing that's missing in this debate is us, as neighbors, helping people that need our help. You know, we've had a - (applause). The idea that the government is a solution to our problems, is an inaccurate, a very inaccurate statement.

I watched the video of that shortly after it happened, and yes, he was explicitly telling her that her neighbors should be the first to provide medical care to a man in this condition.  And Tom Coburn is supposedly an M.D.

Sometimes you have to reflect that it's a good thing the country is more compassionate than any one group of citizens in any one state.  Otherwise Oklahoma might must be left to the fate Sen. Coburn seems to think is best for it.