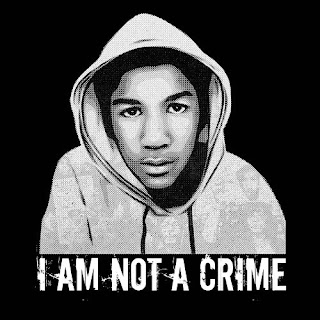 NPR tells me this morning Juror B37's book deal (and by now we all know who "Juror B37 is) is dead.  Apparently social media blew up after her CNN interview, and the deal is defunct.

That cleared up a lot of my thinking about this verdict.

Because while there was clearly a problem with the law in Florida, the law that shaped the jury charge that made it nearly impossible to convict George Zimmerman of a crime because the state couldn't put up a story that proved beyond a reasonable doubt that George Zimmerman had no justification for killing a young black child in his neighborhood who got into a fight with Zimmerman, because at the point there was a fight, it was self-defense and the last man standing gets to make that legal claim.  As a lot of people have pointed out, what about Trayvon Martin's right to self-defense?  But, of course, he never had one, and as the dead man in this scenario, he can be presumed guilty, which is pretty much what the law instructs.

And Juror B37's interview on CNN makes it clear she was ready to presume Martin guilty before the trial started.  Which, legally, is okay; the only person who gets the presumption of innocence is the defendant; and therein lies the problem.  The law should shape the angels of our better nature, not ball-gag them.  So there's the failure of the law.  But the law, in the end, has to take the jurors as it finds them; and it is clear that, while most of the country didn't believe George Zimmerman's story, Juror B37 was ready to believe it from the beginning, and nothing was going to shake that resolution.

After all, people rioted because George Zimmerman wasn't arrested immediately.  And besides, a black kid was beating up on that nice white man who really didn't mean any harm, but who had no choice but to shoot the person attacking him.  I mean, what other way out of the fight did he have?

Why am I so glad her book deal fell through?  In part because I suspect she'd planned it all that way.  As one observer told Dahlia Lithwick:

“She really wants to be a juror. She seems to be going out of her way to minimize the disruptive effect of a multiweek trial on her life. Jurors rarely do that. She is also taking pains to avoid saying anything particularly sympathetic to either side. Both sides tend to be very skeptical of jurors who are particularly eager to serve on high-profile cases. Often they have their own agendas, or are attention-seekers.”

And she seems to have had this book deal arranged before the verdict was in.  That's enough to make me glad she won't profit from her public service.  But why was she on the jury in the first place?  Lithwick goes on to quote Mark Twain on jury selection, just to show everything old is new again:

In this age, when a gentleman of high social standing, intelligence and probity, swears that testimony given under solemn oath will outweigh, with him, street talk and newspaper reports based upon mere hearsay, he is worth a hundred jurymen who will swear to their own ignorance and stupidity, and justice would be far safer in his hands than in theirs. Why could not the jury law be so altered as to give men of brains and honesty and equal chance with fools and miscreants? Is it right to show the present favoritism to one class of men and inflict a disability on another, in a land whose boast is that all its citizens are free and equal?

There's more to it than that in this case. There is a subtle racism in the comments of Juror B37, especially in her CNN interview.  There is a willingness to give George Zimmerman every benefit of the doubt, to allow that whatever happened that night redound to his credit, because, after all, a young black male walking behind the buildings in this neighborhood is certainly suspicious, and since we only have George Zimmerman's account of how the fight started and what occurred during the fight, it's only reasonable to agree Trayvon Martin deserved to die and George Zimmerman did nothing wrong.  And once we agree with that, it's quite easy to say the jury charge made us do it.

It could open a whole new dialogue about laws that may need to be revised and revamped to suit a 21st century way of life. The reader will also learn why the jurors had no option but to find Zimmerman Not Guilty due to the manner in which he was charged and the content of the jury instructions.

That's how the literary agent hoped to sell the book.  But even if we do live a 21st century way of life, we do it with 19th century (at best) mindsets among the populace.  And those mindsets find excuses in the law for their conclusions, excuses the law too easily places there:

"I think George Zimmerman is a man whose heart was in the right place, but just got displaced by the vandalism in the neighborhoods, and wanting to catch these people so badly that he went above and beyond what he really should have done," she said.

"But I think his heart was in the right place. It just went terribly wrong.

If anything, Zimmerman was guilty of not using "good judgment," the juror said.


Which, of course, means Zimmerman committed manslaughter. But it was just a young black man, so no harm, no foul.  Besides, I suppose the gun just "went off."  They do that, you know; guns have a mind of their own. Well, there's as much evidence for that as there is for this:

"I think George got in a little bit too deep, which he shouldn't have been there. But Trayvon decided that he wasn't going to let him scare him ... and I think Trayvon got mad and attacked him," she said.

Because, as I said, the law gives the benefit of the doubt to the defendant, not to the dead; and especially when the dead is a young unarmed black man, and the defendant is an armed white man, that's a benefit that doesn't tend to lead to justice.   For example:


The juror said she did not believe Zimmerman profiled Martin, who was African-American, because of the color of his skin.

She believes he thought Martin was suspicious because of the way he acted.

"Anybody would think anybody walking down the road, stopping and turning and looking -- if that's exactly what happened -- is suspicious," she said.

Or it could be someone unfamiliar with the neighborhood trying to find his way back to the cookie-cutter apartment where he belonged.  But, as I say, the dead don't get the benefit of the doubt; especially when the law doesn't require that they get it.

And why didn't the prosecution bring up race in the trial?  Because of what Charlie Pierce calls the "barely implicit racism" of Juror B37, who is truly representative of the people of Sanford, I have no doubt.  To bring up race among whites, is to accuse whites of being racists, and that makes them so uncomfortable they really don't want to listen to anything else you say.  Pretty much the same reason President Obama can't openly discuss racism in American society.

It is our hidden wound; and we expend a great deal of energy keeping it hidden.