Livin' in a post-racial world 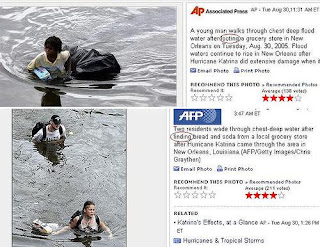 The first photo, taken by Dave Martin, an Associated Press photographer in New Orleans, shows a young black man wading through water that has risen to his chest. He is clutching a case of soda and pulling a floating bag. The caption provided by The A.P. says he has just been "looting a grocery store."

The second photo, also from New Orleans, was taken by Chris Graythen for Getty Images and distributed by Agence France-Presse. It shows a white couple up to their chests in the same murky water. The woman is holding some bags of food. This caption says they are shown "after finding bread and soda from a local grocery store."


But that was 8 years ago, and we've elected an African American male as President twice now, right?

The white boy, Preston, is interviewed with his family on the set of the "Today" show. Knowing his kid is safe, his Dad describes the event as “funny” and tells the audience that if this could happen to a “cotton candy all-American kid like Preston,” then “it could happen to anybody.”


What happened to Preston is that, at the age of 7, he decided to take the family car on a joy ride.  But what he did could happen to anybody; including a black 7 year old:

The interviewer, off-camera, asks Latarian why he took the car. He replied: “I wanted to do it ’cause it’s fun, it’s fun to do bad things.” The interviewer asks further, “Did you know that you could perhaps kill somebody?” And he replies: “Yes, but I wanted to do hoodrat stuff with my friends.”

Preston didn't get asked about whether he thought he could kill someone.  He gets sympathy:

When the host, Meredith Vieira, asks Preston why hid from the police, he says, “cause I wanted to,” and she says, “I don’t blame you actually.” With Preston not too forthcoming, his Mom steps in to say that he told her that “he just wanted to know what it felt like to drive a car.” When Vieira asks him why he fled from the police, he replies with a shrug. Vieira fills in the answer, “You wanted to get home?”

Vieira then comments on how they all then went to church. The punishment? Grounded for four days without TV or video games. Vieira asks the child, “Do you think that’s fair?” He says yes. And she continues, “Do you now understand what you did?” He nods and agrees. “And that maybe it wasn’t the smartest thing?” He nods and agrees. “You gonna get behind the wheel of a car again?” He says no. Then she teases him about trying out model toy cars.

They conclude that this incident just goes to show that “Any little kid, you never know what can happen…” and close: “I’ll be seeing you at church buddy boy!”

Latarian, on the other hand:

The interviewer asks him what punishment he should receive and Latarian offers a punishment very similar to Preston’s: “Just a little bit… no video games for a whole weekend.” In a longer version of this news story, now taken down, the camera focuses on a reporter who explains that the police plan to go forward with charges of grand theft against him. While he’s “too young to go into any type of juvenile facility,” he says, “police say they do want to get him into the system, so that they can get him some type of help.”

No, we don't treat black males differently than white males.  Whatever gives you that idea?