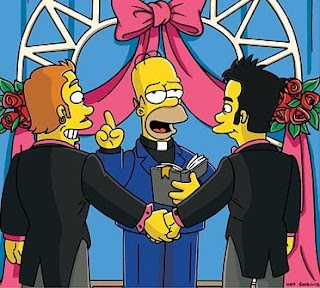 
The UCC has had an order for "inclusive marriage" in its Book of Worship since at least 1986.

Does this mean if I use that service in Indiana to bless a same-sex relationship (which I could call a "holy union"), I'd be arrested?

Hell, it might be worth it for the court fight.  Always wanted to play Snopes in a trial.....

I am also reminded that the Loving v. Virginia case not only involved a mixed-race marriage which Virginia had forbidden, but Virginia went on to make such marriages a criminal offense, even if they were legal elsewhere.  Which sort of sounds more like this statute than the Texas Constitutional provision that simply won't recognize the union of two people the same sex as "marriage" under Texas law.

I mean, there's quite a difference between "you can't do that" and "You'll go to jail for doing that."