The Whites of Their Eyes.... 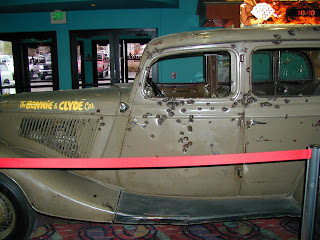 There was a shooting in the Houston area several years ago now.  The police were looking for a black man in a stolen car, and they found a black man in a car.  He pulled into his own driveway, got out of the car, and faced a number of police officers with drawn weapons.

They forced him to the ground, and his mother came out of the house to see what the commotion was.  As they forced her back (apparently thinking she might be a threat), the "suspect" tried to come up off the ground to protect her.

At this point yet another policeman drove up.  As he got out of his vehicle, he drew his weapon and emptied at the man on the ground.  9 shots, and one hit the "suspect."  Who was not guilty of anything except Driving While Black.

Add to that, now, Getting Cigarettes While Black:

A neighbor saw someone reaching into the car and called 911. While he was looking into the vehicle, deputies arrived in response to the burglary call.

Middleton said he was bent over in the car searching the interior for a loose cigarette when he heard a voice order him to, “Get your hands where I can see them.”

He said he initially thought it was a neighbor joking with him, but when he turned his head he saw deputies standing halfway down his driveway.

He said he backed out of the vehicle with his hands raised, but when he turned to face the deputies, they immediately opened fire.

“It was like a firing squad,” he said. “Bullets were flying everywhere.”

But the suspicion of a black man is not why I bring this to your attention.  It's the well-trained police officers and their guns:

In Baptist Hospital and groggy on Saturday, Middleton said he would be in recovery for several weeks. His wounds are not life-threatening.

“I’m just glad they didn’t hit me here or here,” he said, pointing toward his head and chest. “My mother’s car is full of bullet holes though. My wife had to go and get a rental.”


That, it turns out, was the first story.  FoxNews reported the deputies fired 7 shots.  It was closer to 17. And this case has already earned its "No sh*t, Sherlock" award:

"As much as we are trained and as much as officers -- which have Type A personalities -- like to say we are in control, we are not," [Escambia County Sheriff David] Morgan said at the conference.


That sense of humility by armed men is as comforting as the fact that I cannot take tampons into the State Capitol if the Capitol police suspect me of potentially disrupting the Lege, but I can always take a concealed weapon in (and bypass the metal detector by doing so) after only 10 hours of training.  It takes three times longer to get trained to drive a car.  But after 10 hours I am competent as any police officer to handle a hand gun makes me feel so much better about the 2nd Amendment and my freedumb.