In the spotlight, losing my religion.... 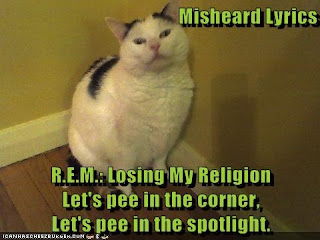 Karen Armstrong here, speaking to Oprah, says that the secret truth of all religions is that one can only say what God is not, even though she claims the Bible is a "starter kit" about what God is.

So already we have a kind of jumble that's pretty much a "do it yourself" kit for religion, which of course appeals enormously to people like Oprah Winfrey, because: a) it puts you, the individual, in charge, and b) it means that whatever you think God is, God is.  That this plays right into the anti-theist charge that any concept of "god" is mere sophistry cannot be denied, but let that go; intellectual rigor is not this "scholar's" point, at least not here.

The more substantial problem is that Armstrong takes an idea as old as Christianity itself, and makes it the the only theology available.  Christian mystics constructed the idea of "negative theology," not as an intellectual escape hatch from all those hard-to-answer or defend questions of theology (which, after all, is the study and discussion of the nature of God), but as an acknowledgement that God is not encompassed within human understanding (and one response is that anything not within human understanding simply is not; but leave that aside for the moment).  There are various negative theologies, all aimed at giving an intellectual framework to the notion that God is, ultimately, ineffable.  Negative theology is a way to talk about that ineffability, by talking about knowing the nature of God through discerning what God is not.

There is something valuable and subtle about negative theology; but it is not a substitute for a theology.

Unless you are Karen Armstrong, who turns her concept of God into a description of a wall; or a snake; or a whip; or a tree trunk.  She abandons, in other words, the humility that negative theology is supposed to engender (God is ultimately beyond our experience or understanding) and replaces it with "God is whatever we think God is, because no one can say what God is!"

Nice work, if you can get it; but lousy theology, and really pretty lame scholarship.

I mention this not to gratuitously bash Ms. Armstrong, but to note a new trend in reporting on American Christianity (I know Ms. Armstrong is British, but she appeals to that most American of Americans today, Oprah):  the idea that the most valid religious experience is one that denounces religion in favor of some much more secular viewpoint.  A man decides the thin skein of doctrine and theology he grew up with in the Pentecostal church can no longer sustain his faith, so he abandons faith in God for the equally tenuous faith in human reason, and by his atheism becomes a subject worthy of an NPR radio story.  Another also abandons his evangelical theology, but again keeps the basic premise that fervor is what matters, and defines Jesus as a Zealot; defines Jesus, as he tells Terry Gross, as someone he wants to worship.  Nothing wrong with that, either; except that we all do it, and writing a book about it doesn't mean you have a better insight than others.  It just means that, once again, to the man with a hammer, the whole world looks like a nail.

So, to Karen Armstrong, who wants God to be a much more convenient proposition, God is simply indefinable, and what cannot be defined cannot impose constraints; or, for that matter, raise pesky intellectual problems.

Let me take the words of Reza Aslan for my example:


[The Apostles] were farmers and fisherman. These were illiterates; they could neither read nor write, so they couldn't really espouse Christology, high-minded theology about who Jesus was. They certainly couldn't write anything down. Instead the task of spreading the Gospel message outside of Jerusalem, of really creating what we now know as Christianity, fell to a group of urbanized, Hellenized, educated Jews in the Diaspora; [and] for [the Romans], having grown up immersed in this Hellenized, Romanized world, the concept of a God-man was something quite familiar. Caesar Augustus was a God-man. What we really see in these 20 years after Jesus' death is this process whereby this Jewish religion based on a Jewish revolutionary becomes transformed into a Roman religion, where Jesus is transformed from a Jewish conception of a Messiah to a kind of Roman demigod.

All of which is accurate; it comports with what I learned in seminary.  Does it mean, though, that all of Christianity is wrong?  That I must throw out the baby with the bathwater, consider the scriptures merely a "starter kit," and set out on my own to define God for me?

Well, I suppose I could; but it would seem more admirable if I engaged my faith community in how to understand this information within the framework of what I learned as the Sunday School version of Jesus.

I find the reasoning that avers that Jesus can't be Christ because the idea is too akin to Roman notions of divinity an interesting one.  On the one hand, no less a scholar than Dom Crossan uses the very idea of Jesus as Messiah as the explanation for his crucifixion and for the ultimate crucifixion of Paul, as well as an impetus for Paul's theology, which Crossan argues set up and continued the idea of Jesus of Nazareth being a political counterpoint figure to Caesar in Rome.  So, you see, you can do it without throwing the baby out with the bathwater.  But there's also underlying Aslan's argument a need for purity that is wholly unrealistic, and to understand this we need to understand the concept of the holy.

Derrida is helpful here.  He points out that holy, heilege in German, (the change of language helps us realize this doesn't involve just English or English speakers), means "set apart in order to be kept pure."  It's a word almost wholly connected with religion, but it could be accurately (if oddly, given its connotations) used to describe a bandage in a sterile package:  the bandage is set apart, sealed off, so it can remain sterile, which is to say, pure.  Of course we don't connect "sterile" and "pure."  We think of "pure" as describing something singular, like a precious metal which has no admixtures in it.  "Sterile" means something germ-free (and so "clean") or something unable to reproduce (which may bring in connections to sexual reproduction as "dirty," but that gets us unto contemplating how "dirt" is simply matter out of place, and then we're off on a whole 'nother pursuit).  But to be sterile in the germ-free sense is to be pure for the purpose of medical treatment, like a sterile bandage.  And both can mean to be "holy," because that's why we call things holy:  they are pure, they are singular, they are set apart and should not be contaminated with admixtures or "dirt."

God, therefore, is holy.  And if God is holy, God is singular.  And if God is singular, God cannot partake of human concepts or of things which are not God, such as Roman demigods or Caesar's who claim themselves to be "Son of God."  If Jesus was declared "Son of God" in his lifetime, it would have been a political declaration, since that was a title claimed by Caesar.  The Gospels say the cross was decorated with a sign "Jesus of Nazareth King of the Jews."  Had it said "Son of God," it would have been no less political in the Empire; but it would be quite confusing to say so today, after centuries of reserving that title for divinity, and that divinity a single historical person.  The need to keep God holy, then, often undergirds ideas like Aslan's, that Jesus couldn't have called himself "son of God" because it would be too much like a Roman, and not enough like a Jew.

Which also sort of avoids the work of Paul, a Roman citizen and a Jew, who declares Jesus divine by virtue of the crucifixion (Jesus' faithfulness to God even unto death) and the resurrection (the sign of God's favor), which is the "first fruit" of a general resurrection Paul seems to have anticipated within his lifetime.  Is that a version of a Roman demigod?  It's a very odd one, although resurrection was a Hellenistic notion of a display of divine favor (and more useful than becoming a constellation, which was an early version of much the same idea).  And was Paul, by the way, literate?  Not in the way we think.  He could read, but writing was a menial task unconnected to reading.  It's clear Paul dictated his letters, much the way an executive or professional today would direct a secretary to turn his words into neatly typed prose.  Typing is still the menial task left to others by those who do the "writing."

Do I mean, then, that Jesus never called himself divine?  I am less sanguine about the issue than Aslan, largely because Aslan demands a purity in his concept of God which the world does not allow.  Did God create the culture of Abrahamic faith, or did the culture of the region where the tribes who came together to become Israel, create their understanding and expression of the nature of God?  I think it more likely, as well as reasonable, that culture is the shaping force; but that doesn't mean concepts of God are merely cultural and wholly human inventions.  I just don't think you can know the dance apart from the dancer.

The pursuit of holiness, in other words, leads you in circles.  As Yeats also noted:

'Fair and foul are near of kin,
And fair needs foul,' I cried.
'My friends are gone, but that's a truth
Nor grave nor bed denied,
Learned in bodily lowliness
And in the heart's pride.

'A woman can be proud and stiff
When on love intent;
But Love has pitched his mansion in
The place of excrement;
For nothing can be sole or whole
That has not been rent.'

I'm not so concerned with purging my religion of Hellenisms or Romanisms, in other words.  Many a Christian mystic has focused more on what God is, than on what God is not, and yet they've kept true to the notion that God is, ultimately, ineffable.  They are also quite comfortable with the notion that God is known bodily; more than one Christian mystic describes the encounter with God as akin to sexual ecstasy.  I'm more comfortable with that theology than with one that insists we can know nothing (which means we can't know anything about God, except that somehow the hole has a donut) or that our God must be so heilege as to be beyond human comprehension; or perhaps, too entwined in human comprehension.