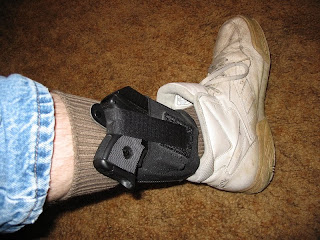 " 'scuse me, Mr. Crazed Gunman, just need to pull up my socks before you pull that trigger...."

Since I'm on the subject of guns:

Ken Hanson, legal chairman of the Buckeye Firearms Association, an Ohio-based pro-gun lobby, told CNN’s Piers Morgan that the $12,000 his company raised for George Zimmerman was to also “ … buy a gun, gear, ammunition, training, security systems, personal protection, whatever he felt was appropriate to defend himself, defend his family, defend his parents.”

When Morgan asked if Buckeye would make the same offer to the Trayvon Martin family—the family of the dead boy, not the family just frazzled—Hanson said he wasn’t aware there was a threat to their family.

Shorter Hanson: “Mr. and Mrs. Martin, we know your son was murdered—bummer—but everything’s been pretty copacetic since, right? You’re not taking this personally, are you?”

So what is Buckeye Firearms Association?

Let’s put it this way. It sponsors something called a Bulletproof Mind Event, which promises to show you how to “survive a lethal force encounter”—or, short of that, I imagine, a black kid with snacks.

I was waiting for something the other day, so I picked up the first magazine at hand:  a gun magazine.  Not my usual reading, so I was curious.  It reminded me of the car magazines of my misspent youth, full of trade blather and manufacturer hype disguised as magazine articles, all about the wonders of the latest products issuing forth from the car...er, I mean, gun, industry.

And then there was the article about the ankle holster.

This little device was touted as a necessity for concealed handgun carriers, because you can't be too safe, and you need the protect of a gun under your jeans and just above your sneakers (the picture illustrated this) in case the perp (they're always "perps," right, and they always 'get away with it' unless somebody has a gun and can stop 'em) can be fooled into thinking you aren't armed (although I thought the purpose of concealed carry was to make the perp think you were armed, or at least not know, so they won't bother you.  It's so confusing.).

And that's when I realized, not for the first time, that these people think they are living in an action movie, and they are the hero of the movie.  If somebody is banging your head on the sidewalk, you have a right to kill 'em, right?  Mr. Hanson thinks so.  But in a civilized society, we'd call that action "assault" and charge the assailant with a crime.  What we wouldn't do is assess the death penalty, even if the victim of the crime suffered serious injury (Mr. Zimmerman did not).  Of course, since government "doesn't work" and "they always get away with it" and people get shot in movies all the time (by the hundreds sometimes) and nobody ever investigates those crimes (one of the funniest bits in "Monty Python and the Holy Grail" are the police officers examining the scenes of the most recent sword mayhem in the film; it's funny because that happens in real life, not in the movies) or even hauls the bodies away (they just disappear, like the wrecked cars and building debris), there is absolutely no consequence to killing people in cold blood.

And, I mean, it's not like anybody threatened Trayvon Martin, or his family.  Because if Martin had been armed, and had shot Zimmerman first, well, that would have been self-defense, too.  Right?  Because Zimmerman coming after him, with Zimmerman carrying a concealed weapon, would have been a "lethal force encounter," right?  And we all know the bad guys always lose the lethal force encounters when they come up against the good guys.

Which means the last man standing is clearly the good guy.  Amirite?