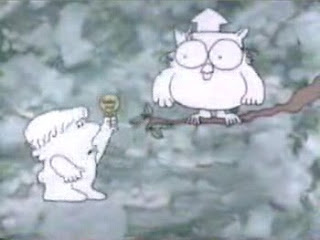 I stumble back into this topic just long enough to ask  "What the hell is going on here?:"

Who – and what – is a journalist? It’s not just about semantics.

And what?  Which is not a question just about semantics, it's about "What the hell are you talking about?"  Is my computer now a journalist because I use it to write posts for this blog?  If I take a stored post and publish it via my phone, is my phone now a journalist?  What what is what in that sentence?

It's a tempting point to go all Derrida on the NYT  Public editor, but that's already a joke that's so inside it's under the stitches (which may be a bit low and inside itself).  So we move on, because in all the glowering a glimmering of reason pokes through:

There is a strong legal component to this discussion: Who will be covered by a federal shield law that would give legal protection to journalists who have promised confidentiality to their sources, if it ever comes to pass? Will it cover only established news organizations or those who get paid for news gathering? Or does it cover everyone with a Facebook page?

Excellent questions which indeed have to be answered before a federal shield law makes any sense at all.  But don't look for any further discussion of those questions in that link, because you can't even find out if Paul Krugman is a journalist or not, over there:

Then, quite separately, there’s a question of the amount of professional respect shown to those like Ms. O’Brien and the columnist Glenn Greenwald, who has broken major news stories about government surveillance for The Guardian in recent weeks.

Is Mr. Greenwald a “blogger,” as a Times headline referred to him recently? That headline was atop a profile that did not use the word journalist to describe the columnist for The Guardian United States, the New York-based Web site associated with the British newspaper. At the time, I wrote (on Twitter) that I found the headline dismissive. There’s nothing wrong with being a blogger, of course – I am one myself. But when the media establishment uses the term, it somehow seems to say, “You’re not quite one of us.” (And that might be just fine with Mr. Greenwald, who has written disparagingly of some media people, whom he calls “courtiers of power.”)

This is the kind of thing I'm usually slagging Freshman composition students for (and sophomores; it runs deep):  making lots of unfounded and unsupported statements and then running on to some other topic.  It's hard to argue against when it gets an NYT imprimatur, but assuming (safely) none of my students even know what "NYT" means, I think I can soldier on.  Still, there's the big, fat question I asked earlier, hanging right over the plate.  How can I not swing at it?

Mr. Greenwald is a "columnist," says Ms. Sullivan; so, of course, is Mr. Krugman (who does have a day job). Can he be a journalist, too?   Mr. Greenwald has, with help (I'm pretty sure he shared bylines on his "scoops"), written some major stories, which he has tirelessly promoted since, and made himself a significant party to.  Well, Geraldo Rivera did the same thing, and he's a respected journalist, right?

Still, what this really comes down to, at the moment, is what Ms. Sullivan rightly identifies as the problem:  "You're not quite one of us."  Journalists are a high school clique, then:  Mean Girls with microphones and TV cameras and editors.  Ms. Sullivan surmises that Mr. Greenwald doesn't want to be a part of their stinky old club anyway; except he clamors to be respected as a journalist so he won't be investigated as an aide to a federal felon.

Nice work, if you can get it.

But who is a journalist?  Ms. Sullivan doesn't have the space (she demurs) to discuss the legal definitions (the ones that might actually matter, and therefore are complicated),  She does offer some attempt at a definition by Frank Rich, who really should know better:

Is David Gregory a journalist? As a thought experiment, name one piece of news he has broken, one beat he’s covered with distinction, and any memorable interviews he’s conducted that were not with John McCain, Lindsey Graham, Dick Durbin or Chuck Schumer.

Let us be kind and simply note that argument doesn't advance the issue one jot.   Apparently a journalist earns her spurs "breaking news" (something Bob Woodward hasn't done in decades, but apparently once is enough), by covering a "beat" with "distinction," and conducting "memorable interviews" (again, when was the last time Woodward did any of these things?)  Didn't Barbara Walters go through this problem about 40 years ago, trying to be taken seriously as a "journalist"?  Can we move on from the who "we" approve of and who "we" don't approve of definitions of high school social life now?

Ms. Sullivan makes her own stab at it, not doing much better than Mr. Rich:

But for now, I’ll offer this admittedly partial definition: A real journalist is one who understands, at a cellular level, and doesn’t shy away from, the adversarial relationship between government and press – the very tension that America’s founders had in mind with the First Amendment.

Which, I guess, does qualify Bob Woodward, now that he's set his sights on being a personal adversary of Barack Obama.  And that this definition disqualifies most of the most famous "journalists" in America, including several who do, or have, worked for the NYT, passes without further comment.

Who is a "journalist"?  Like the question about how many licks it takes to get to the center of a Tootsie Pop:  the world may never know.

Adding:  is this guy a journalist?  Once in the club, is there anything you can do to get thrown out?  To lose your standing?  Just wondering what the parameters are here....