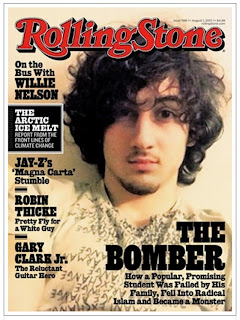 I don't care.  Really.  Except this "Cover of the Rolling Stone" story caused NPR to dredge up the Shel Silverstein song that only people as old as me will remember, and to take that lighthearted, silly, JOKE song, seriously.

Evil does not drag its knuckles, or shave its head, or cover itself in tattoos, or have a particular skin color.  It can be young and genial. Which seems to be how this picture can support the cover story.  But the reactions to it...well, like Charles Pierce:  I don't get it.

Lawrence O'Donnell outdid himself last night over this story, ranting on and on about how Tsarnaev's friends couldn't understand how Tsarnaev would do this, to the point O'Donnell described them all as "oblivious" and obviously wanted to round them all up and put them in jail for not telling him what he wanted to hear.  And I got the feeling that, if he could, he'd buy up every copy of RS and burn it in a bonfire lit on the ruins of the RS building, after which he would sew the ground with salt and piss on the ashes.

Because, ya know, evil is fookin' evil, m'f'er, and it should look evil!  Or something.  And besides, kids these days!  They don't even know what evil is when they're standin' right next to it!  What good are they?  Why should anybody else interview 'em after O'Donnell did? 'Cause, they're oblivious!

The man was ranting about this.  It was almost embarassing.

As a pastoral care matter, I can understand such personal reactions.  But as a public news matter?  If the news is that slow, let's all just do what the trial lawyers used to do in August:  take the next six weeks  off and go on vacation.

Not that I really care what happens to Rolling Stone magazine.  But now that I'm commenting on it,  I do wonder about what makes people outraged, and how they express it.