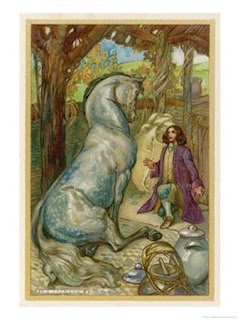 Let’s start by acknowledging that Cruz isn’t a yahoo. He takes the wildest yahoo positions arguably of any prominent politician in America, although of course the competition for that distinction is increasingly fierce. I mean, he is way out there. The right 30-second attack ads could just shred him to bits. Plus, smooth-tongued though he is, he’s bound to say crazy things on the campaign trail, about women, gays, undocumented immigrants, what have you. He practically makes Paul Ryan look like Paul Wellstone.


But in spite of that, he is at the same time something of an intellectual. He’s Harvard Law. He has argued before the Supreme Court. He is widely read. He can quote Rawls, they tell me (John, not Lou). He’s no Dubya and is not to be misunderestimated.

Ted Cruz prompts what I call the Grand Unified Field Theory of Intelligence:  i.e., he can't really believe those insane right wing Tea Party ideas because, good god man, he went to Harvard!  So all that nonsense that spews from his mouth is just for the rubes.  Right?

Keep telling yourself that, if it makes you feel better.


Cruz: Yes, but you know something, it is not something that started a couple of years ago. Let me just go back to when he was maybe four. When he was four I used to read Bible stories to him all the time. And I would declare and proclaim the word of God over him. And I would just say, ‘You know Ted, you have been gifted above any man that I know and God has destined you for greatness’. And I started making declarations about the Word of God to him every day. When he was eight years old I was very active in an organization called the Religious Roundtable.
...
This was a coalition of Christians and Jews who was very instrumental in helping Reagan get elected. I was on the state board of the Religious Roundtable, so when my son Ted was eight years old, all we talked about around the dinner table was politics because I was so involved with the Reagan campaign. So during that time is when I asked him so many times, ‘You know Ted, when I lost my freedom in Cuba I had a place to come to. If we lose our freedoms here where are we going to go? There is no place to go.’
...

Ted enters high school, the Free Enterprise Institute organizes a group of five kids, called them the Constitutional Corroborators, now Ted is reading the The Federalist Papers, The Anti-Federalist Papers, and each of the five kids memorized the entire US Constitution. ... So before my son left high school he was passionate about the constitution. He was passionate about freedom and free markets and limited governments. Before he left high school he knew without a shadow of a doubt what his purpose in life was and it was to defend and protect freedom and the Constitution, to fight for free markets and limited government, and it became a passion in his life. So this is not a trajectory of three years, this is a trajectory of 30 years.


That's not the Senator speaking of himself in the third person; that's his father.  It may be Sen. Cruz doesn't really believe the nonsense he spouts because he's Harvard educated and eloquent and has argued before the Supreme Court.  Then again, the apple doesn't fall far from the tree.

So is Ted Cruz, as Michael Tomasky and so many other observers hope, just fakin' it to make it?  Or is he seriously the McCarthyite he seems to be?

And he obviously has more than book smarts. He has cunning. This Joe McCarthy act he has down pat—on Chuck Hagel, on Benghazi—may be disgusting and, well, McCarthyite, but don’t think it isn’t by design. Cruz knows that being compared to McCarthy by people like me is manna from heaven: it makes rank-and-file wingnuts stand up for him, and it makes rich ones open their checkbooks.


If it is by design, can it also be by default?  Is this the real Ted Cruz, not some grubbing opportunist out to fleece the rubes because after all, he's educated!

I'm not really interested in the career of Ted Cruz so much as I'm interested in the idea that well educated people can't have crazy ideas.  It's a bit of Enlightenment faith we still haven't let go of, although some of our best writers figured out nearly a century ago (Hemingway, Fitzgerald, Eliot, to name three) that the lessons of the Enlightenment didn't spare Europe from two devastating wars and complete economic collapse.  But despite all evidence to the contrary since, American punditry still thinks tout le monde reads much of the night and goes south in the winter.  And that includes crazy Tea Party politicians who have the right education credentials; because, after all, it is education that makes us civilized, and raises us above the riff-raff like tail gunner Joe McCarthy.  The Sen. from Wisconsin may have believed that stuff, but then he never argued before the Supreme Court.

One other thing:  the yahoos of Swift's fourth journey of Gulliver, looked just like Gulliver.  All they lacked was his education and cultural training.  Gulliver was quite sure he was distinct from the yahoos thanks to these attainments, and his ability to learn the language of the Houyhnhnms.  He was quite sure, in other words, that he was no yahoo.

The Houynhnhnms thought otherwise.  One could safely say, they knew better.