Where sheep may not safely graze.... 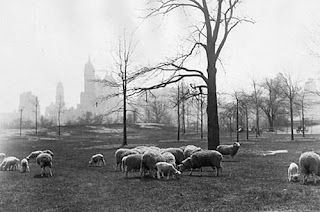 
“You have a city, 139 square miles, you can graze cattle in vast portions of it, dangerous herds of feral dogs roam in there. You have three percent of fourth graders reading at the national math standards, 47 percent of Detroit residents are functionally illiterate, 79 percent of Detroit children are born to unmarried mothers.”


No, I don't care about the number of Detroit residents he claims are "functionally illiterate," except insofar as that is a societal failure, not a personal one.  It's the size of Detroit that catches my eye.  139 square miles sounds huge, doesn't it?

Houston is the fourth most populous city in the nation (trailing only New York, Los Angeles and Chicago), and is the largest in the southern U.S. and Texas.

I mention all of that to keep things in perspective:  Houston's population has ballooned from just under 2400 to almost 6 million (in the CMSA) in 150 years.  That is still based, as much as anything, on the petroleum industry (much as Houston might try to deny it).  The other part, the big "anchor" in the local economy, would be the Houston port, but that, too, is based on petroleum more than anything else.

Which means, if  James Howard Kunstler (and most geologists) is right, that Houston could be Detroit before this century is over.  And Houston is not only larger than Detroit ever was (at its highest, the population of Detroit was just under 2 million), it covers about 63 times as much square miles; or, the state of New Jersey.  And I am within driving distance (walking distance, practically) of pastureland where horses (no cattle, that I know of) graze.*  Or did, as of a few years ago; I haven't been to that part of town recently, though it isn't far from me.  We do have feral cats in the neighborhood (I feed two of them on a regular basis), but no dogs of that description.  And while the Houston Independent School District is one of the largest in the country, I wouldn't say we have the best education system money can buy; mainly, because we're determined to spend so little money to buy one.

Is Houston, then, Detroit?  Nah.  But it could be; and if it were, if the economic collapse of the '80's became permanent, rather than a bump in Houston's road (we all still remember it, though we remember it like a bad dream that maybe we didn't really have), Houston could be Detroit in very short order.  Except the Houston CMSA is 3 times more populous now (and climbing) than Detroit ever was, and covers as much ground as New Jersey.  If we all follow the lead of Galveston and allow chickens to be raised in back yards, will it be a sure sign of a collapsing culture?

I dunno, but if things collapsed here again, and this time didn't turn around, would the George Wills of the world blame it on "culture"?  Well, maybe; if Houston ever sheds its image as white enclave, and is seen for what it really is:  the most ethnically diverse CMSA in America.

But until then, we'll just keep praisin' Jebus for the free market what loves us so.  You know, the one that took such good care of Detroit until it all went wrong culturally.....


* The idea of cattle grazing inside city limits is a sign of social decay is amusing.  Sheep grazed in Central Park until 1934, although I've seen movies from the '40's indicating they were still there (the scenes may have actually been Brooklyn, however).  Where I live was once very productive farmland (the old silos still stand nearby, hard against what was once train tracks).  Honestly, Will is really a big goof.