None for me, thank you 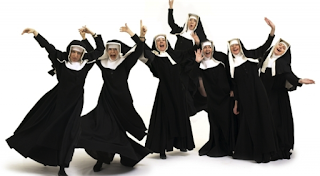 So "Millenials" are leaving the church because of people like Kim Davis and Phil Robertson (my daughter, the child of a pastor and a "Millenial," doesn't attend church (!) and has probably never heard of Davis or Robertson.  I do so hate generalizations.).  And this means the church is either doomed, or had better "shape up" because the "nones" are "a lived reality for thousands of Americans with unique stories to share."  Well, the Millenials probably think their stories are unique, but as Qoheleth said, there is nothing new under the sun.

Change the incidentals, but the fundamentals are the same that I grew up with, two generations ago.  "Nones" were a "lived reality for thousands of Americans" then, too (maybe more.  "Thousands" is a high school where I live, and my district has four of them.  Probably 20 times that many in the greater Houston area.).  For perspective on the numbers (not from a statistical viewpoint but the much more useful to us non-statisticians viewpoint), we can fortunately turn to Robert Wuthnow.  This is long, I'm going to intersperse comments with paragraphs.

The rise of the Nones—meaning people who say they don’t have a particular religious affiliation or actually identify themselves as being non-religious—does appear to be a trend that is picked up in the very best academic surveys as well as in polls of lesser quality.

Starting, though, with the first two paragraphs, so we have a proper introduction.  Point no. one, then:

One is that a number of the people who are categorized as Nones still claim to believe in God. Many of them occasionally attend religious services; hardly any of them identify clearly as atheist. So they may be, for some reason, identifying themselves as non-religious even though they still believe. We also know from some of the surveys that they identify themselves as “spiritual but not religious,” meaning that somehow they’re interested in God and spirituality, and existential questions of life and death, but are turned off by organized religion.

If there is any rise in atheism or agnosticism, it isn't because more people consider themselves "nones" than ever before (if, indeed, they even do).  And "turned off by organized religion?"  You mean, like the Beatles after they got back from India?  Like most of the '60's generation, at least according to reports and perceptions at the time?  Like the "Jesus Freaks" who brought the 60's to a close and started the religious craze(s) of the '70's and beyond?  The same people who populated mega-churches and snubbed their nose at denominations those churches were either a part of, or never belonged to?  Haven't I seen this movie more than a few times before in the last 50 years?

Second, the political climate over the last ten to fifteen years appears to be part of the story. The religious right has become so publicly identified with conservative politics, that people who were formerly willing to say, “I’m religious” in [denominational] terms are now saying, “You know what, I just don’t want to have anything to do with it.” That’s a hard story for many of us to believe, but there does seem to be pretty good data supporting it, as part of the story at least.

Political tides are, again, changing.  "History swings like a pendulum do."--Roger Miller, more or less (a joke for those older than Millenials.  Sorry.)  And the church, at least the black church, was associated with the civil rights movement in the '60's.  As Dr. King's letter points out, most of the white churches and synagogues:  not so much.  Another reason young people 50 years ago were turning their back on organized religion, but not necessarily on religious belief.

Then, number three, is that the studies that actually ask a person the same question a year or two later are finding that individuals change their minds a lot. That seems to occur especially with people who are identified as Nones. One paper identifies at least half of the Nones as “Liminals,” people who are trying to decide, on the cusp of making up their mind. You ask them one year, and they say “I’m non-religious,” you ask them the same question the next year and they’ll say they’re religious and they’ll tell you what kind of religion they are. Or [vice-versa].

Quelle surprise, but people change over time.  Who'da thunk it?  Which raises an interesting problem with polls:

Now this may be characteristic of the times in which we live—people are uncertain about who they are, about what they think religiously—but it also challenges how we think about polls. Polls have always assumed that whatever a person says is reliable, and that they really mean it and stick with it.

If it is "characteristic of the times in which we live," those "times" extend back to at least the early '60's.

So if you find any changes over time, that’s significant because polls are measuring stable opinions—if those change, that’s important.

Fair enough.  And much better to do that work, than wave around a poll that says somebody found more "nones" this time than the time before, and so the ecclesiastical sky is falling.  And it turns out there's another problem, and again, it's not with the statistical analysis of poll results, or even the interpretation of those results.  It's what Walt Kelly labeled "the buckshot use of the curved question," i.e.:  what's the real value of the whole enterprise?

But the fact of the matter seems to be that polls are [measuring] answers to questions that are not very thoughtful, because polls are hastily done by telephone rather than in person. If you’re a respondent in a poll, you’re being asked anywhere from four to five complex questions every minute. They’re throwing questions at you so rapidly that you often have no idea whether you really gave the right answer that you really believe or not, and then they only have an 8% response rate anyway, so you have no idea who the other 92% are who weren’t in the poll.

I always loved that polls are "scientific," because honestly, how do you test them?  With another poll?  Am I the only one who sees the fundamental problem here?

No, I'm not.  Read the rest of the interview at the link. you'll find Mr. Wuthnow presents four good reasons to take polls about matters that have nothing to do with elections with a large grain of salt.  And as for the rise of the "New Atheists," let me just say this:  Richard Dawkins is proving himself not to be a figure many people want to associate with publicly (on Twitter, at least); Christopher Hitchens is dead and no one mourns him or publicly declaims his "teachings"; and I can't think of one atheistic figure (the leader of China was in the country when Francis was) who draws the attention and adulation that a Pope does, especially when that Pope is as pastoral a figure as the present pontifex.

So, yeah:  Americans are less "religious."  Somehow.  I guess.  Maybe.  Still not sure how you define that, though.