"Pretend you're good at it." 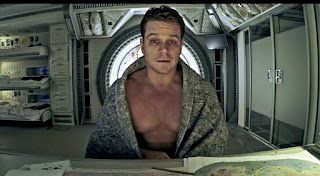 Yes, this is what I look like in the morning.  Why do you ask?


"They constantly try to escape
From the darkness outside and within
By dreaming of systems so perfect that no one will need to be good."'


Been thinking about this:

“It sets an expectation that the public will or should automatically accept scientific solutions to problems because people think scientists are heroes. The scientist comes up with a solution, and the protagonist accepts it. That’s the power of the narrative from the perspective of the scientist—that someone could be persuaded to act based on a heroic scientific finding or instinct only.”

In terms not of the newest Ridley Scott movie, but of an ad I keep seeing from Microsoft since I've started watching football again (what can I say?).

It's an ad, so it's selling a product, but the product is the amazing ability of the right computer to unlock the potential of some child somewhere on the earth who will come up with the technological solution which will solve our current difficulties.  I think global warming gets a mention, though it's significant the problems to be solved are all first-world problems (transportation, renewable energy, recycling, IIRC), not problems of disease (polio in Pakistan, for example, or, relevant to today's headlines, parasites in Africa*) or overpopulation or drought or access to food and water, etc.  But even if those problems were addressed, the solution would be technological.

Not, say, philosophical (or religious, if you prefer), such as an idea on how we learn to live without expanding first-world appetites for food and things to the entire planet, an appetite the planet can barely sustain now for those who can satisfy it.  Or how we can live by actually caring for each other, rather than only caring about our own comfort and gain, and trusting the system (technology) to take care of everybody else in spite of our lack of concern for them.  I think, again, of Clifford Simak's science fiction story where a Martian (!) philosopher has a new theory that, if known, could change human thinking and society and make it well, more humane.  But technology has led humanity down a path which makes the one human who can save the dying philosopher (and so his philosophy) too parochial and agoraphobic to even leave his estate and perform the surgery; so the knowledge is lost, and human history continues down the path its technology has created.  In the end (it is part of a series of stories), humanity is altered by technology into oblivion; or at least into something no longer recognizably human.

That is the power of our current narrative:  that someone can be persuaded to act based on a heroic scientific finding or instinct only, which will alter the course of the technology we now enjoy so we can keep on enjoying it into the ages (the true Biblical concept usually translated as "life everlasting.").   We won't have to alter us, the savior will alter it.

Which Christianity has understood for millennia to be one of the problems of Christianity:  that we are inclined to want the savior to alter the situation, rather than to alter us.  But one outcome will save us, the other will doom us.

It has been ever thus.

*Parasites might one day fall to medicine and science, but the obstacle to eliminating polio in Pakistan is a melange of ideology, politics, and history.