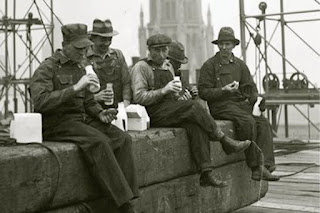 Speaking of "nones," the more things change, the more they remain the same:

Yes, even as Chicago’s class-conscious workers navigated an oppositional relationship to the institutional churches, they never wavered in their conviction that God was on their side. As the turn of the century approached, this belief steeled a growing wave of working-class religious activism.

In the spring of 1894, for example, Chicago’s Trades and Labor Assembly founded a church of its own—a congregation by and for the worker. Though short-lived, the Modern Church underscored ordinary believers’ dissatisfaction with the existing religious options. As one of its leading members put it, “[the church] has strayed from the paths marked out for it by its twelve immortal walking delegates, under the supervision of the Grand Master Mechanic of the universe.”

Later that same year the Pullman Strike catalyzed a new wave of working-class religious resistance. Many Catholics stopped their subscriptions to the archdiocesan newspaper out of frustration with the editor’s refusal to side more decisively with the American Railway Union. At churches across the city’s South Side, meanwhile, Protestant churchgoers rose up against “scab ministers.”

Nowhere was the backlash more severe than at Pullman Presbyterian Church. When the minister there railed against the strike—declaring at one point, “there is a maxim that half a loaf is better than no bread, and in my judgment the employees were getting two-thirds of a loaf”—working people walked out. By the time the dust had settled the church had lost nearly twenty percent of its members. Notably, all but a handful immediately re-affiliated with other congregations, making clear that they were not abandoning the larger church but rather this particular one, which had become too closely identified with capital.

The proliferation of such incidents had clergy of every denomination on edge. Why were working people so alienated from the church? This was the subject of an 1899 article in the American Journal of Sociology. The author—a Baptist minister based out of Chicago’s South Side—interviewed workers, asking what could be done to win them back. Their words varied but their answer was resoundingly clear: “Apply the Sermon on the Mount”; “Preach Christianity instead of theology”;

“Let the pastor have a personal relationship with the needs of labor. Be our champion.”
As they assimilated such data, many church leaders came to see the answer to the churches’ workingman problem and to the nation’s industrial crisis as one and the same: champion conservative labor reform.

I especially like the line "Great Master Mechanic of the Universe."  I won't venture to mock up a similar analogy for Millenials; let your imagination run wild.  And the idea that the church "has strayed from the paths marked out for it" is as old as Martin Luther, at least.  Or as old as Eliot, if you prefer:


Does any of these seem even vaguely familiar?  People leave churches in droves for any number of reasons, and it doesn't mean they are leaving religion.  Anthony pointed out in comments below that the "nones" category was invented as a way of signaling a rising atheism which really doesn't exist.  Equally, the idea that what is happening now has never happened before in human history is...well, it's just ignorant.

I visited one of these "upscale" churches; in St. Louis, though, not in Chicago.  St. Louis is Detroit's future today, frankly:  a once great city now a shell of itself, as people drained out of it because of the freeways, not because auto makers left.  Same effect, though.  The church was a UCC church, once the place to see and be seen, frequented by the Missouri Governor, the mayor of St. Louis, and most of the rich and socially important people of the town.  The church had its own silver pattern (sterling, not plate), and it's own china pattern.  It employed cooks and dishwashers for meals on Sunday and during the week.  All the echoes of that gilded era resounded in the empty halls.  It was not a place frequented, in its heyday, by the working class.

Something else from that interview, related but unrelated, that I've been thinking about recently:

One other constant bears mention here: because church life in America operates on a voluntary basis, Christian leaders are necessarily sensitive to changes in their membership rolls, which have immediate implications for their congregations’ bottom lines. This sensitivity can render religious communities susceptible to passing fads. But it can also make them more responsive to reform movements calling the churches to a more faithful witness in the world.

We want our religious leaders to represent Christ in the world, sometimes so we don't have to.  But when they do that, we resent them for not doing what we would rather they do.  Which raises an interesting conundrum:  is it possible to follow Christ in the world and be a part, especially an important part, of organized religion?  Or do the demands of the institution make too many claims on even a St. Francis (I'm thinking specifically of Kazantzakis' portrayal of Francis in his novel Saint Francis.  That's a bit unfair if you haven't read the novel, but Francis despairs of founding an order because while he demands absolute loyalty to God (indeed, a fanatical devotion), his followers understand too well the needs of even a monastic order.)  As Niebuhr said of nations, you can't force others to make a sacrifice for what you believe; you can only ask that of yourself.

Funny how much history repeats itself.