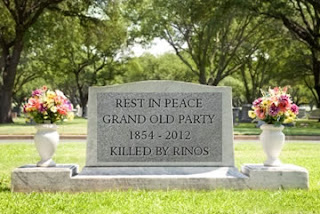 We been down this road once or twice before....

As long as I'm quoting/referring to what everybody else is saying:

I chuckle a little when I see all these headlines about the GOP 'imploding' - largely in leftish publications. Because yes, they are imploding. But it's also something like falling off the ground. It's hard to see how much they can really be 'imploding' in any meaningful sense when they'll almost certainly retain the House next year, have a decent chance at holding onto the Senate and can by no means be counted out to win the presidency. They also continue to dominate state governments across the country. The simple reality is that the country is held hostage to a structural breakdown in the Republican party which is that a substantial fraction of the House caucus demands an increasingly nihilistic attack on the structure of the government itself. It's most concentrated in the ridiculously named 'Freedom Caucus' but extends well beyond it in various shades of extremity.*


My only disagreement is I really don't think the GOP has a snowball's chance in hell of winning the Presidency in 2016, even if Jeb! or Rubio defeat the occupants of the clown car and get the nomination.  Neither of them is credible enough to defeat Hillary either, and I think it's a given Hillary will be the Democratic nominee.  Whether I like that or not is another matter, but I think it's a given.

For the rest:  yeah.  The GOP isn't going anywhere.  They run most of the states of the Union, including the second most populous state (with the soon to be declared third largest city in the country).  You can blame gerrymandering all you want:  as Molly Ivins never tired of pointing out, it's a representative government.  Top to bottom.  And while the whole country votes for the President, most of those people who vote for the loser also elect the Congress that President has to work with, as well as the governors and state legislatures where a lot of the work of government, for better or worse, gets done, and where only a fraction of that work gets straightened out, or even reviewed, by the Supreme Court.

So the rumors of the death of the GOP, especially based on the candidates for the GOP nomination for POTUS, are greatly exaggerated.

You heard it here first.  At least I'll claim that, anyway.

* and why is that?  Why does that extreme character extend well beyond the 40 or 50 Freedom Caucus members (about 1/9th of the House, at best)?  It ain't because those 50 reps are the insane fringe that nobody knows how it got there.  It's more because they are the purest distillation of what the GOP is really about; that, and the POTUS roster tripping over their oversized shoes on the national stage.

They are just the purest members of a party almost entirely given over to governance by insanity and righteous ideology that is the entire GOP.  And, as I say, the GOP isn't going anywhere anytime soon. You might as well be a Dawkins' acolyte expecting the imminent collapse and departure of "religion" from the face of the earth as to expect the GOP to implode and go the way of the Whigs.