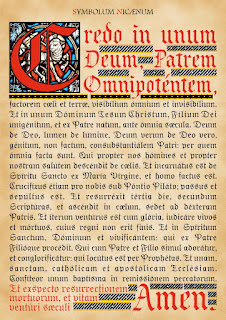 Two statements that should say the same thing, but that couldn't be more different in meaning.  And the difference lies, not in the prepositional phrase, but in the verb.  What do we mean when we say "I believe"?

We don't mean the same thing as "trust" or "faith," which are synonymous terms.  If I trust you, it doesn't necessarily mean I believe in you.  You might say I can't trust God unless I believe in God, but you've skipped right over the issue and again committed the error of using the term without examining the meaning.  So, if I believe in you, what do I mean?

I mean, at a minimum, to be supportive.  Obviously I don't mean the same thing when I say "I believe in God."  But what do I mean?  That I assent to certain propositions about the nature of a deity?  But do those propositions have to include "existence" in the way that word is commonly understood?  Can the concept include "being"?  And then, what does "being" mean?  If I say "I believe in God," am I saying I believe in a anthropomorphic deity, like Zeus or Apollo?  Or am I saying something about a more complex concept, a concept better grasped by the word "unknowing" than by definition (one of the ultimate acts of knowing)?

We wander off immediately, you see, into the concept "God".  What do we mean by "God"?  Some insist a bearded old man, a la Blake's engravings.  Did Blake even believe in such a concept of God? Or was it simply an artistic contrivance, a convenient shorthand the way a man in a coat (we'd call it a  robe, not meaning the kind of bathrobe or house robe we use today; "coat" is the Biblical translation) with long brown hair, a brown beard, and a kindly expression.  No one knows what Jesus of Nazareth looked like, but most Americans are convinced they know him when they see him, especially when he's with little white children. 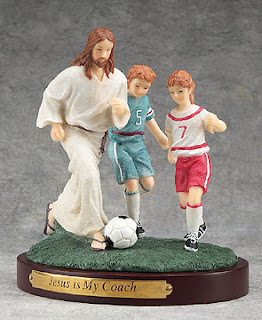 I suppose we could settle that concept first, but the problem then is, we have to decide whether or not God "exists."  And the problem is, how do you define "exist"?  No, seriously:  does the computer screen you are reading this on "exist"?  In the same sense as your family, friends, co-workers?  You?  What do we mean by "exist"?  A stone exists, but not the way a cat does, and a cat doesn't quite exist the way my wife does.  The usual distinction is that my wife (if not the cat) has being.  But what does "being" mean?

And then apply that concept to what Tillich called the "Ground of Being"?  He didn't come up with that label to make God ineffable or more a product of philosophical rumination.  He was pointing to the fact that God as Creator is also source of life, or existence (which may be two different things).  God is the source of being (not Being, that's Heidegger, and perhaps a whole 'other complication) and so God cannot have being, any more than your thoughts mean you have thinking.  You think, and you have thoughts, and so you are the ground of your thoughts.  But you are not thought; that would be a reductive argument, indeed.

It's not an elegant argument, but the terms of the discussion are abstract and somewhat obtuse.  We can do three hundred pages on being and existence right here, or we can get to the nub for our purposes:  God is not a human being with superpowers.  God is God; Creator of the Universe and Ground of Being.  God is "I am."  God is without referent.  You are the children of your parents; the colleague of your co-workers; the brother/sister/cousin/niece/nephew in your family; mother or father or spouse.  You are in community with others, you know yourself by who you are not as much as by who you are.  Your "existence" is not merely a matter of identity, because if you lose your identity you do not cease to exist.  You may lose your "mind" to dementia, but you will still exist in the world, still be a person, still deserve the respect accorded to persons.

You are you even if you are not you, because you are a human being among human beings.  God is "I am."  God is without referent, even without peer.  God is not Zeus with a wife and other gods to argue with; God has no father Chronos, no Titans to fight for control, needs no other god to drive the sun across the earth or welcome souls to Hades or to stir the waves or carry messages or model beauty.  It is perhaps more correct to speak of God apophatically, since everything said about God directly is sure to be wrong.

Now, what do I believe in?

I don't even know what's being said when someone says "I believe in God."  To me it's an empty phrase, like "God Bless America."  Is that a command?  A prayer?  A wish?  A declaration of national pride?  Is it performative, or declarative, or simply decorative?  Saying "I believe in God" is not the same thing as saying "I believe in luck," or "I believe that children are our future" (well, what else is except the ones who will carry one after we're gone?).  "I believe in God"?  In what?  And what does it mean in that sentence to "believe"?

This is the kind of thing I wish I could crowd source.  Because, really, "I believe in God"?  I might as well be saying I believe in mac and cheese.  Which is not to say I reject the very idea of God and want an argument for God's "existence" (what a silly notion).  But to say "I believe in God" is to say nothing.  It's a null set.  It's a sentence without content, a sign that doesn't signify.