The grinning skull beneath the skin 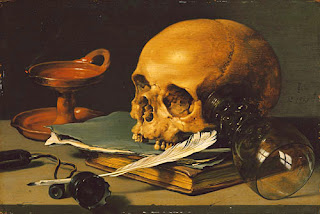 I've written on this subject before; and perhaps the entry to any discussion of euthanasia should face on time ("when") rather than subject ("what").  Be that as it may, this is a very good article on the conundrum of physician assisted suicide.  Yes, it is a lovely idea that say that we can have a "good death," but like a "good war" we only know that in our intentions, never in our actions; and we only get to determine which one was "good" in retrospect; we never get to set the conditions so the outcome will be as we wished it.

And frankly, let me say up front that "physician assisted suicide" is still just suicide.  The shock of suicide, the pain it brings to those left behind, is that whatever problem led to the death is now irresolvable.   It leaves a tangled mess, a "why?" that can never be answered, never be undone.  It is neater and easier when physicians are involved and everyone agrees only if everyone agrees never to look back and everyone agrees death was better than asking, perhaps, just one more question.

One of my law professors impressed upon me the problem with euthanasia, the "easy death" that we now couch as "physician assisted suicide."  He pointed out we can never be sure the deceased agreed to the plan because they wanted the succor of death, or simply because they wanted to stop being a burden on the living.  Or perhaps it was the living who wanted to drop the burden of the dying, and get on with it.  The case in the article is a case in point:  a father is dying, and wants to end it early but not, it turns out, because the pain is unbearable (that is corrected for him); it is mostly because he doesn't want to burden his child, who is caring for him.  She has the opportunity to assure him he is not a burden, and his death is not hastened but met when it finally comes.  It wasn't necessarily easier that way for either of them, but no one was "responsible" for his death, and no one left a question unanswered that death would leave unknowable:  why did he want to die?

The author is right, too: we fear death.  We do all we can to keep it away from us.  I've known people refuse to return to a church building because a funeral was held there, and the memories of that being the last place the beloved was before burial, is too much.  It's why people prefer funerals at funeral homes.  We used to die at home, and the family prepared the body for burial and stayed with it.  Someone would stay up through the night, out of respect for the loved one.  Now death happens in hospitals and strangers take the corpse and perform operations on it you don't want to know about, and keep the body in a building we only visit if we absolutely have to, and inter it in a place no one goes who doesn't have a reason to be there.

"My death, is it possible?"--Jacques Derrida

No, it isn't.  Your death is possible; mine?  Inconceivable.  I will be a ghostly presence observing the world without me.  The world will fill up the hole you leave behind as certainly as water closes over a stone.  But I will be the stone descending into the water, aware I am sinking and wondering why no one will retrieve me.

You, on the other hand, will just be gone; and we will mourn you and get on with our lives.  My life cannot end, because I cannot imagine the world where I am extinguished; to even do so, is to imagine I am there to observe it.  It's a neat trick of consciousness; in order to be self-conscious, we cannot also be conscious of our absence.  Which is another reason we fear death.  It is the only experience of life that is not lived through.

And so we think we don't have to live through it at all; not if we don't want to.  We can go to death, rather than let death come to us.  We can live through it by being in charge of it.  And then what?  Like any first experience, we can report that it isn't that bad after all?  No.  And we can't decide it wasn't such a good idea after all.  It is the one irrevocable act.  Perhaps that is why, today, we fear it more than ever.