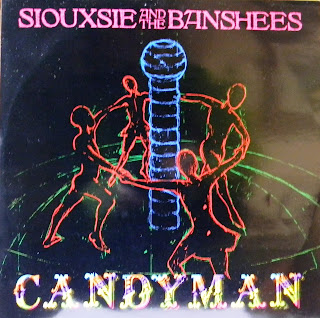 Yeah, I know what it looks like....
but it's better than the video.  Trust me.

And if you want something really creepy for Hallowe'en:

What is about to transpire in a few moments is wrong! However, we as human beings do make mistakes and errors. This execution is one of those wrongs yet doesn’t mean our whole system of justice is wrong.

To my loved ones, I extend my undying love. To those close to me, know in your hearts I love you one and all. God bless you all and may God’s best blessings be always yours.
Ronald C. O’Bryan

P.S. During my time here, I have been treated well by all T.D.C. personnel.

That's the final statement of the "Candyman," the "man who killed Hallowe'en."  If you fear poisoned candy on October 31, like it's because of Ronald C. O'Bryan, executed on March 30, 1984, for the murder of his son Timothy.

As the Texas Standard told me yesterday, Mr. O'Bryan took out several life insurance policies on his children, some his wife knew about, some she didn't.  She objected to the expense because, at the time, Mr. O'Bryan was deeply in debt.  He'd been in the jewelry trade at one point, and new how cyanide was once used to clean gold (no longer, but once upon a time).  He either had some left over, or got hold of some because of that (I honestly don't recall).

But the point is:  he planned the whole thing out.

He took his children and their friends out on Hallowe'en, 1974, and at one house no one answered.  He lingered as the group moved on, then caught up with them carrying several giant Pixie Sticks (nasty candy in the best of circumstances, but hey!  Allergen free!).  He passed them out to the kids, and made sure Timothy ate some before going to bed.

The Sunday after Timothy died, his father was in church singing a solo during worship, and collecting on the life insurance policies as soon as possible; literally before his son was cold in the grave.

Strangers don't do this:  pass out poison to children at random.  Family members do such things.  I suppose that should be a lesson about violence:  it's usually personal, seldom random and produced by strangers.

But, as I say, in the light of his crime, his last statement seems particularly chilling, to me.  I don't agree with Hillary Clinton:  I don't think there are reasons for the death penalty.

But some people really are monsters, and just wear the mask of common humanity.
Posted by Rmj at 4:28 PM