Putting the "Public" back in Public Theology 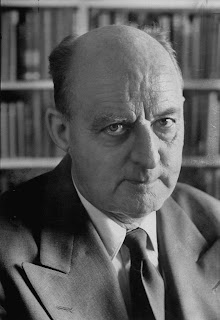 Would you buy a public theology from this man?

This presents an interesting problem:  who gets to say what theology is sound theology?

A couple of points:  you can't have an intelligent discussion on Twitter.  It simply isn't possible.  You might as well conduct a discussion of theology in mime, or as characters in a Beckett play.  2:  what is "public theology"?  The last person I know who actually practiced what could be called "public theology" was Reinhold Niebuhr, and his work is far more subtle and nuanced than anyone who discusses it in public ever acknowledges.

Not that easy to have a public discussion by newspaper column and open letter, either.  Much of the commentary at RD focusses on the letter, and its tone; but I still don't understand the criticism.  I'll get back to that in a moment, because there are two issues here, and one is the forum.

But the question remains: is Douthat qualified to write about Catholicism? He converted in his teens, and has practiced the religion for several decades. He wrote a book about Christianity and Catholicism in America. His columns may reveal, as Faggoli implies, problematic notions about church history and theology, but does that make him “unqualified”?

The comments at RD focus on the letter, which doesn't strike me as nearly so condescending or elitist as some claim it is:

On Sunday, October 18, the Times published Ross Douthat’s piece “The Plot to Change Catholicism.” Aside from the fact that Mr. Douthat has no professional qualifications for writing on the subject, the problem with his article and other recent statements is his view of Catholicism as unapologetically subject to a politically partisan narrative that has very little to do with what Catholicism really is. Moreover, accusing other members of the Catholic church of heresy, sometimes subtly, sometimes openly, is serious business that can have serious consequences for those so accused. This is not what we expect of the New York Times.

It seems to me this is addressed less to Douthat than to the New York Times, and the primary point of concern is the loose use of this word "heresy."  Lay people may toss that word around lightly and even liberally; but these Catholics take the word seriously within the teachings of the Catholic church, and any one person's relationship to those teachings.  It is true the Church no longer has the power to physically punish heretics; but the word itself, the letter writers argue, still has meaning far beyond "I don't like your theology."

As for the question of Mr. Douthat's qualifications; well, there's no question he doesn't have any.  He's not trained in Catholic theology any more than he's trained in medicine or law.  If Douthat made a claim about the law that was not only false but contrary to the idea of justice embodied in the law, I'd feel free to point out he "has no professional qualifications for writing on the subject," and that his views on the law "has very little to do with what the law really is."  Yes, we may perceive the law to be something else, but that doesn't mean it is.  We have to make that argument, we can't just say "I prefer to think of the law this way, and so I do."  If that is the basis of your argument, I think I'm on solid ground to point out your argument is based on ignorance.

But, of course, the Protestant stance is perceived as putting the believer before God directly, and so theology is unnecessary and even an obstacle to understanding.  There are some comments at RD that make this argument, more or less, based on Vatican II.  But again, that may be a popular or even pietistic stance:  it does't make it right.

I just heard a caller to Diane Rehm challenge the Rev. Barry Lynn on his Christianity because Rev. Lynn hadn't sufficiently, for the caller's taste, confirmed the importance of John 14:6.  The caller wasn't making a theological argument, but I could have responded to him with one (the Rev. Lynn was wiser than me).  Would that have changed the caller's mind?  No.  But then again, the caller wasn't, as I said, making a theological argument.  It is a popular argument in some circles, but I don't think (for many reasons) it is a sound one; nor is it at all a litmus test for Christianity (the only accepted tests are baptism in the name of the Trinity and confession of Jesus Christ as Lord and Savior).  It sounds good, in other words, to some people; but that doesn't make it a sound argument.  And if I say that the caller doesn't understand the most accepted standards for claiming to be a Christian, am I being elitist?

On the heresy issue, I think this is a language game we don't all participate in.  Massimo says the term, rather like Godwin's law, stops all conversation:

I don't have to agree with him in order to understand the concern such a term raises.  Am I to tell him to "get over it" because it doesn't raise the same concerns for me as does "Black Lives Matter"?

"Unqualified" here doesn't mean Douthat must be silenced and never speak in public again about Catholicism.  But "heresy" can mean, in the same discussion, that what you have to say is beyond discussion; indeed, that's precisely what the term means.  Suddenly the reference to Godwin's Law doesn't seem so spurious after all.

Can we still judge what Douthat has to say; can we weigh it and find it wanting?  Yes, certainly we can.  I don't find much in Douthat's column that really addresses matters of theology or church history specifically (and besides, that isn't really the problem); but that makes the complaint against Massimo's tweets valid:  you can't discuss these topics in 140 characters.  It doesn't address the issue of the letter, however, which is more concerned with "heresy" than with Douthat's thin grasp of theology.  Still, if Douthat doesn't even understand what the term "heresy" means in the context of a theological discussion (or even a discussion of theology), then why listen to him on the subject?  And if we don't understand it, shouldn't we learn, before commenting?

What am I thinking?  This is the internet!