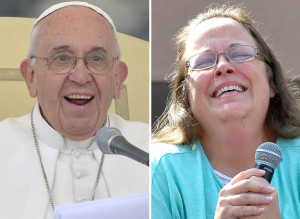 I always wake up after one of these "titanic struggles" feeling vaguely like I have a hangover.  It's a sense of going overboard the day before, and wondering what I was thinking that it seemed like such a good idea at the time.  The evidence, unfortunately, is there for all to see; the legitimacy....not so much.

"There was no desire on the part of the Vatican to cause her to be part of a media circus during the middle of the pope’s trip."

The Vatican, he said, wanted the meeting with Davis to be "personal," rather than "polemical or ideological."

But boy, we sure let Mat Staver turn it into that, didn't we?  Once word came out, we turned it into a litmus test on the validity of Pope Francis; or, more accurately, the validity of our feelings about Pope Francis.   Let's be clear what happened:

Mat Staver, a Liberty Counsel lawyer, told Time magazine that he, Davis and Vatican Embassy officials began discussing a possible meeting on Sept. 14. The Sept. 24 meeting lasted about 15 minutes, prior to the pope flying from Washington to New York.

And why did Mat Staver want this meeting?  For the publicity, of course.  This whole legal case is about publicity; it isn't about practicing law.  Every filing Liberty Counsel has made in this case has been a joke and an insult to the bar.  This case is all about public sentiment, and if Staver can't win that with his client, he'll try to win it by association with the Pope.  And we let him do that.

That this visit was arranged for the Pope is perfectly clear now.  Staver worked with "Vatican Embassy officials."  Not with the Vatican in Rome, the curia, the Pope's personal staff; the embassy here in the U.S.  Again:  what did the Pope know and when did he know it?  And what did he bring to the meeting?  A blessing of all things Kim Davis has done to bring her to our notice?  He said nothing unique to her, gave her nothing he didn't give any other visitor who got an audience with him.  But Mat Staver got what he wanted:  he got us all to jump around like angry monkeys and fling our poo at the idea that the Pope would meet with someone we don't like!  How dare the Pope do that?!  He's not supposed to show consideration to people we don't like!  He's only supposed to be nice to people we approve of!

Which is why the Vatican (do we know what the Pope thinks?) wanted the meeting to be personal, rather than "polemical or ideological."

But thanks to the internet, we thrive on the ideological.  So we can't see it any other way.

I still haven't heard anything about this meeting on NPR. It didn't make the PBS Newshour last night, I doubt it was on the national TV news.  But yesterday it was all the rage on the intertoobs.

I've got the hangover, and the posts, to prove it.  Today?  Except for that post at Huffington Post, it seems already to be melting away.

We don't need the hair of the dog that bit us this morning.  We need to agree not to do that again.

*Or, if you prefer, Charlie Pierce has a go at palace intrigue where he points out along the way that the Vatican Embassy is in the hands of Archbishop Carl Vigano, who is good buddies with Mat Staver, and involved in arranging the meeting.  Still, as Fr. Martin points out, we have the case of the Pope meeting a lot of people in America and leaving such meetings to his staff to arrange, with him providing the bromides of "Stay courageous" (or "strong," stories are starting to differ on that point) and handing out rosaries.  You'd think if Francis knew the person he was talking to was an anti-trinitarian he'd have held back on the beads.  But you have to consider he's much busier than you and, as I say, relies on his staff to arrange these things.  I know the lives of busy people, they are often involved in fights in which they don't have a dog.  And still, if the idea that when the "man of God" meets someone it's an approval over which we have a veto, we're gonna have to go back and take that one up with Jesus.

The better response to this remains: Really?  We want to get played on this?  As a comment at Pierce's place says:  the Pope met with convicted felons, too.  Does that mean he approved of their felonies?  Or of their humanity?
Posted by Rmj at 6:44 AM