Nostalgia ain't what it used to be.... 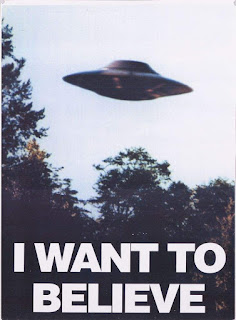 One day, I'll get a copy of this poster.

So I've been watching the revived "X-Files" because I watched the original with my daughter (born a year before the show premiered, and she doesn't remember much about it now), and I've binged on it twice now on Netflix.

I want to believe.

And I've read two articles now about the third episode, which aired last night.  One focussed on a transgendered minor character (used more to contrast human v. lizard attitudes about gender; don't ask.  Or do; it was really kinda funny.), the other on nostalgia for the '90's (Youth really is wasted on the young).

Nobody has yet mentioned the homage to the precursor to "X-Files," from the '70's.  Probably because no one old enough to remember "The Night Stalker" wants to admit they're paying that much attention to the new "X-Files." 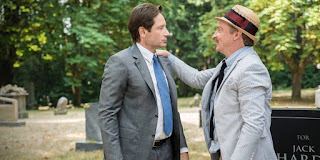 That's Mulder with the "monster."  Notice the seersucker jacket, the straw hat, the tie, the generally rumpled look.  Notice, too, this "man" becomes a "monster" (actually reverts to his normal form) at night.  Being the monster, he supposedly stalks at night, kinda like celery (c'mon!  Am I that old?). 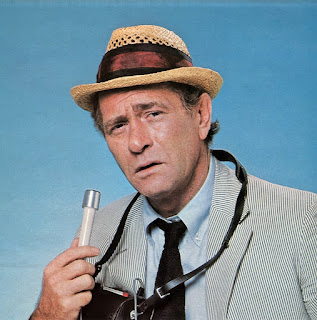 Darren McGavin as Carl Kolchak, the "Night Stalker."  You gonna tell me that look above is an accident?  The only thing missing was Kolchak's nearly ubiquitous tape recorder and camera.

Kolchak was always taking flash pictures, trying to get pictures of the monster-of-the-week for his newspaper articles.  In the "X-Files" episode Mulder struggles with the "app" on his smartphone, trying to get pictures of the monster.  He walks around with his phone haplessly strobing in the dark, until he accidentally gets a photo of the creature's face.

I'm just sayin'; that episode was much more than a call out to the creature feature episodes of the '90's series.  It was a love letter to weird TV.

You read it here first.

Fair is fair, and fairness compels me to point out that Vulture caught the Kolchak "easter egg", and several other references to X-Files OS (make it happen!  YOU KNOW YOU WANT TO!) episodes, but they missed the biggest Easter Egg of all.

"Jose Chung's 'From Outer Space' " tells the story of an X-file incident from multiple points of view, including overlapping retellings of the same event where the tellings include the same characters and setting, but absolutely nothing else common to each of them. It's an hilarious send-up of "eyewitness" reports that includes Alex Trebek as a Man in Black.

But the echoes of "Jose Chung" are very clear.