"Somethin' happenin' here, what it is ain't exactly clear...." 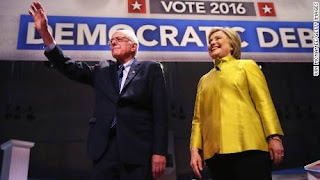 Nate Silver's analysis jibes with my experience among college and high school students, and the attitudes of my Millenial daughter.  True, she agrees with me on politics, but I'm much more radical about economic issues than she is.  I'm a child of the '60's, she's a child of the 21st century.  The '60's were a much less challenging time, economically, than she's ever known.

Just as “socialism” is becoming more popular with young Americans, so is another label that implies a highly different set of economic policies. Americans aged 18-29 are much more likely than older generations to have a favorable view of the term “libertarian,” referring to a philosophy that favors free markets and small government. Indeed, the demographics of Sanders’s support now and Ron Paul’s support four years ago are not all that different: Both candidates got much more support from younger voters than from older ones, from men than from women, from white voters than from nonwhite ones, and from secular voters than from religious ones. Like Sanders, Paul drew more support from poorer voters than from wealthier ones in 2012, although that’s not true of libertarianism more generally.

If both “socialism” and “libertarianism” are popular among young voters, could it be that younger voters have a wider spread of opinions on economic redistribution, with more responses on both the “0” and “100” ends of the scale? It could be, but that’s not what the data shows. In fact, on the General Social Survey question I mentioned earlier, younger Americans were more likely than older ones to be concentrated toward the center and not toward the extremes on the redistribution issue.

The cynical interpretation of this is that the appeal of both “socialism” and “libertarianism” to younger Americans is more a matter of the labels than the policy substance. Relatedly, it’s hard to find all that much of a disagreement over core issues between Clinton and Sanders, who voted together 93 percent of the time when they were both in the Senate from 2007 to 2009.

But terms such as “liberal” and “conservative” are fairly cynical also, at least in the way they’re applied in contemporary American politics. Rather than reflecting their original, philosophical meanings, they instead tend to be used as euphemisms for the policy positions of the Democratic and Republican parties, respectively. Those parties’ platforms are not all that philosophically coherent, nor do they reflect the relatively diverse and multidimensional political views of individual Americans. Instead, the major American political parties are best understood as coalitions of interest groups that work together to further one another’s agendas.

What’s distinctive about both the Sanders and Ron Paul coalitions is that they consist mostly of people who do not feel fully at home in the two-party system but are not part of historically underprivileged groups. On the whole, young voters lack political influence. But a young black voter might feel more comfortable within the Democratic coalition, which black political leaders have embraced, while a young evangelical voter might see herself as part of a wave of religious conservatives who long ago found a place within the GOP.

A young, secular white voter might not have a natural partisan identity, however, while surrounded by relatively successful peers. In part, then, the “revolutions” that both Sanders and Paul speak of are revolutions of rising expectations. We’ll explore this theme more fully in Part II of the series, and consider some alternative explanations for Sanders’s success.

The highlighted portion is something I've come across before:  this isn't a revolution across class lines, it's more the discontent of the middle class.  Not to disparage the middle class per se, but the "revolution" Bernie offers is simply what the country had when I was in college:  cheap tuition (at $4 an hour it was cheap even in the '70's) and job opportunities when you graduated (although we graduated into the '80's, when the economy was slowing down for the first of many booms and busts unknown since the end of the Great Depression.  New Deal Programs were already being undone, a process that accelerated as we stepped on the economic rollercoaster).  It's not a revolution Bernie Sanders offers; it's a nostalgia trip.  It's a different version of trickle down:  if we just make the middle class secure, everyone will be happy.

But the experience of the New Deal was actually that the working class prospered, which made the economy prosper.  The Great Depression ended with war-time spending, but that money wasn't into middle-management jobs and professional salaries:  it went to manufacturing and construction and mining, and from that middle-management was needed.  The money flowed up from the bottom, not up and down from the middle.  What Bernie promises is to make the middle-class middle-class again.  But even if he had a Democratic House and Senate he couldn't do it; not without upending decades of economic theory and introducing massive government spending that would return the country to what it will never have again:  a manufacturing and technological base that dominated the world the way America did after World War II, when so much of the world that could compete with us lay in shambles.

There was a reason "Made in Japan" meant "junk" even into my childhood.  But there's also a reason it never will again.

I learned in seminary the simple wisdom of the prophets:  that if the king took care of the poor, all would be well with everyone.  Money that bubbles up, to use a water metaphor, is better for the oikonomos than money that trickles down, because "trickle down" is always, as the feller said, what you get from the horse after the horse gets the oats.

We do need a change of economic theory, as well as a change of heart (what else would it be if we suddenly cared for the poor as if their lives mattered to all of us?).  And it needs to start somewhere.  But if Nate Silver is right and the revolution Bernie Sanders is leading is a "revolution[ ] of rising expectations," the real change that is needed won't start there.

Even the prophets knew that promises were one thing, but production was what mattered.  They also understood that society was built from the bottom up, not from the top down.  Until we learn that lesson again, we will continue to be disappointed with the outcome of our hopes and dreams.
Posted by Rmj at 8:43 AM