Raise Giant Mushrooms In Your Cellar! 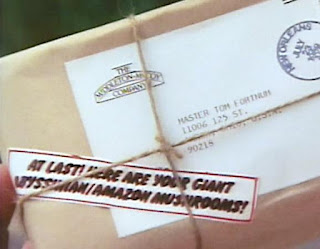 Religion Dispatches is one of the more interesting sites I keep track of (out of the three or four I bother with); sometimes it is dully useless, and then suddenly it has two or three sterling posts.

This is one of those latter times.

First, I've never been a fan of TED talks.  This article at RD puts them in the context of American history and gets precisely at why TED talks suck:

There’s a reason new ideas often pass through rather convoluted channels of scholarly vetting, government regulation, and media and public skepticism before they make their way into widespread acceptance: most new ideas are wrong, and some of them are outright deceptive. Cuddy’s big research finding, for example, has proven very hard to replicate. The consultant Simon Sinek’s 2009 TEDx lecture about persuasion–the third most-watched TED talk in history–is such a logical and evidential wreck that it’s not even worth the space to pick it apart here.

But if TED and the 19th century lecture circuits—the new lyceum and the old—can offer us anything, it’s a reminder that science and research offer more than new knowledge. They come with a kind of aesthetic, and they invoke certain emotions—among them thrill and hope.

Personally, I have a favorite TED talk: “6 Ways Mushrooms Can Save the World,” in which the mycologist Paul Stamets talks about all the ridiculously useful things you can do with fungi. A bearded bio nerd, Stamets preaches about the use of mushrooms to treat diseases, clean up environmental toxins, and generate biofuels. He imagines a kind of fungal revolution.

Are the world’s environmental problems caused by a lack of good fungal technique? Well, no, there’s a lot more at play. You can’t have a real conversation about environmentalism without discussing capitalism and the distribution of resources—which is to say, power. But after 17 minutes of listening to Stamets, a certain fuzzy optimism takes hold. There’s a promise here that would be familiar, I think, to anyone who’s been moved by a great motivational speech or sermon. It’s a sense that, faced with the grind of daily life, and the intractability of its problems, somehow, through some flash of understanding, the basic terms of our struggle will change.


Yes, I do think TED talks reduce rather neatly to the man with the hammer who sees nothing but nails.  But we aren't all interested in driving nails, so what is it that makes TED talks so popular?  The dirty little secret that TED talks aren't about improving us, but about improving everyone else:


How your world can change; not you.  Learning a new posture is not really changing you.  Appreciating the power of mushrooms is waiting for the world to catch on, it doesn't any action on your part (you're just one person, what can you do to see that mushrooms create biofuels and clean up the environment?).  That your world can change means, of course, that you don't have to.    You don't even have to grow mushrooms in your basement, and change the world that way!  You just have to know the power of mushrooms and then it's, hey, why isn't somebody doing this so I can drive a mushroom fueled car?  Because I would if They would!  It's a win-win!  You don't really have to do anything except get more comfortable with the fact that the only tool-kit you need is knowledge!  Understanding is optional, and limited to the material universe and what can be done with it to fix your problem, or the world's problems!  The basic terms of the struggle that are going to change are:  what kind of struggle am I engaged in?  To know myself?  Or to simply know better what the world can offer me?

Aye, there's the rub.  After all, it's far easier to watch a TED talk and conclude that if everyone just watched that social problems would be turned inside out.  Beats actually engaging those problems with your own two hands.

The other article at RD I want to bring to your attention is another excellent contribution from The Cubit.  Here is a nice slice of it:

Second, I think social scientists observe how evangelicals have an influential voice in American politics, and they assume that other religious groups share a similar connection between religion and politics. Perhaps they assume that most religious people gather at least once a week, making religion a convenient place to approach citizens about political issues. But religious beliefs do not equate to churchgoing, and it isn’t at all clear that most ministers make political statements from the pulpit.

Third, if you have strong opinions about religion, you’re probably concerned with its role in politics. People with religious commitments can rejoice that research proves religion to be relevant. Those who are skeptical of religion can reduce the political opinions that they disagree with to idiosyncratic religious dogma. This study on religion and prisoner reentry lends itself to this kind of thinking. Someone who supports reentry, for example, might conclude that their political opposition are just judgmental because they believe in a punitive God.

It's an article about prisons and our attitudes toward them; but really, it's about how we decide what those attitudes are (the poll that people prefer prisoners be punished ad infinitum tend to also believe in a "vengeful God" is based on the responses of 386 people in Missouri, or roughly the entire membership of a small church).  But the analysis of how we think about religion in popular discourse it's what's fascinating.

Another problem with a lot of these kinds of surveys is that they don’t reveal what people actually mean when they indicate that they adhere to a particular belief.

So for example, in this study, the researchers ask people whether they believe that, “it is important to forgive those who sin.”  I think Christians (who seem to be the main focus of this study) at all points along the political spectrum could agree with that idea very strongly, but what they mean by “forgiveness” could be very different. A person could believe that it is important to forgive formerly incarcerated people by welcoming them into churches, while also believing that criminals don’t deserve any special government assistance. The simplistic way the survey questions are worded doesn’t provide any way to account for this kind of nuance.

Not only does the poll question not account for nuance, the very formulation of the question establishes a simplistic world which doesn't exist, but which then becomes the basis for how we discuss the world we live in.  How do we even get close to the lesson my Pastoral Care professor taught us, that "Life is messy"?  Maybe by abandoning the concept of a public discourse:

I’ve been fascinated by the fact that so many people could share very similar theological views, but then come to different conclusions about what that theology should mean for people in prison.

As I’ve talked with people, it has become clear that a number of other factors play a role: their position within the criminal justice system, their personal experiences with law enforcement, their relationships with incarcerated people. I’ve met people who were staunch supporters of a “tough on crime” approach until one of their loved ones got locked up. I’ve met people who were somewhat indifferent to criminal justice system before they were involved in a prison ministry, and then became ardent advocates for reform.

How much of the shift in public opinion about gays and marriage (if not yet "gay rights") was attributed to people realizing their friends and family included gays and lesbians, and suddenly their marriages were a good thing, not an appalling thing?  The difference is that gays and lesbians got media coverage:  our prison population, despite being one of the largest on the planet, is almost entirely invisible.

But the relationship of ideas to experience, still holds.   People matter, and ideas eventually fall into line behind that truth.  Not always; and not entirely; but to elevate ideas above people is, ultimately, monstrous.

Which brings us back to the TED talks:  if you want the struggle to change, how do you want that to happen?  Through your efforts in putting a shoulder to the wheel?  Or through changing your mind about what the basic terms of the struggle are?  If you want to change the latter, ultimately all you really want to change is how other people think, so they come around to agreeing with you.  If you want to bring change through the former, it doesn't mean you have to engage a political process or become an activist or even an "agitator" (Jim Hightower's definition of an agitator:  the thing in the washing machine that gets the dirt out).  Maybe all you have to do is change your understanding of the terms of the struggle.  In Christian terms, that means first seeing the presence of the basiliea tou theou.  But the second part, and harder, is living in the basiliea tou theou.

That's a struggle no TED talk can help you with.  But maybe the fact that TED talks are "secular sermons" points a way out of the problem.  Because living a secular life is always easier than living a religious life.  The world has always supported the former; the world has never really supported the latter.  But one is the way of wisdom; and the other is just the way of the world.
Posted by Rmj at 8:43 AM