The Carousel of Time 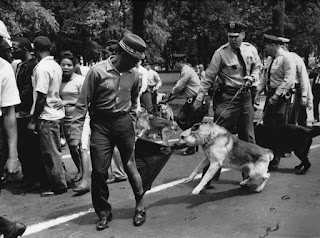 What still surprises is that it took so long for JMM to see it.  But when the scales fell from his eyes, they fell completely:

It is mind-boggling to see that it is considered a point of serious discussion that President Obama made race relations in this country worse.

That's almost lost in the entire post, but if you take seriously what Marshall points out, it isn't mind-boggling at all that Obama gets blamed because race relations haven't improved.  That's the very nature of being black in America that's encapsulated in the long quote in the middle of Marshall's article.  The problem is Marshall's argument, starting with the persecution of Bill Clinton which made him, in significant ways the "first black President," misses what Gene Lyons pointed out at the time:  this is Southern politics played out on the national stage.  Whitewater was nothing more than Little Rock on the Potomac.  And now, of course, with Barack Obama in the White House, a President doubly-damned because he is black and a Democrat, the former Democratic bastion of the South is doubly-disappointed that the Democrats abandoned them, and put a black man above them in their White House (and yes, I'm not just referring to the paint color).

Being a Democrat in the South was a matter of heritage until the Civil Rights and then the Voting Rights Act, and you can't understand the animosity toward Barack Obama without understanding that.   It's as much a part of Southern history as slavery and the Civil War, and it's another reason that war is over but the melody lingers on.  If it is mind-boggling to see that we are having a serious discussion about how Obama made race relations worse in this country, you only have to pay attention to the history of the South, a history that goes far beyond Harper Lee's one novel, or even her "second" one (which is not as good as the famous one but, in some ways, more interesting), and not be gulled by the excitement that 2008 proved we were now a "post-racial society."  And that history includes the fact that the South continued to live almost as if the Civil War never happened far into the 20th century; and the rest of the country did, too.  After all, it took a Southern President to pass federal laws that began to break down the racism that was endemic to all of America.

We were never a post-racial society because of the election of Barack Obama; it just made us feel good to imagine we were.  If Barack Obama had even once shown a glimmer of anger about race in America, he would have been damned as the "angry black man," and that would have been an end to him.  Martin Luther King coming out against the Vietnam War would, by comparison, have been a mere slip of the tongue.  Whenever Obama even noted his race, as when he said his son would have looked like Trayvon Martin, it caused screams of outrage that betrayed the racism that now even dares speak its name because it's not about race, it's about how Obama has "damaged America."  And yet as long as Obama ignored the issues of race in America, we could pretend that was all behind us, that we had left it in those black and white photos of the Sixties.

That Obama has been a disaster for America is an article of faith among many Fox News viewers.  How he as done this cannot be defined; it is simply agreed that he has.  Because he is a Democrat?  Partly; but we all know it is more than that.  It is a continuation of the politics used against Bill Clinton, but the difference is this:  Bill Clinton supplied his enemies with ammunition, small caliber though it was; and Bill Clinton was white.

Barack Obama has made the ugliness of American politics plain for all to see.  Maybe it's more toxic than ever it was before, but I don't think so.

I think it's just more visible.  Any culture built on conquest, genocide, and an international slave trade, cannot forever pretend to its innocence and purity of heart.  Donald Trump wants to "Make America Great Again!," and we all know what he means; it's barely even encoded.    In fact, it explains the animosity that continues toward "Obamacare."  As the Rev. Al Sharpton told Larry Wilson, Obama provided healthcare for 19 million people.  Poor people.  Non-white people.

And that's how Obama "damaged" America.