On death and penalties.... 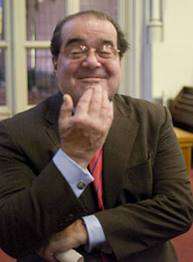 After my first reflexive thought that I was relieved Scalia was dead, I collected myself and wrote the following on my Facebook page:

What I think and what I feel about the death of Justice Scalia is not entirely within my control, but what I say publicly is. My private and now my public prayer: May Antonin Scalia rest in peace. May God give comfort and consolation to all who love him.

My statement after I collected myself was genuine, as was my first thought and my spontaneous laughter at my friend's post. Sometimes we just do the best we can.


In that spirit, let me offer this:

A local law professor on a local NPR show just mentioned that the late Antonin Scalia was "in charge" of the 5th Circuit, which includes Texas, the state most notorious for it's use of the death penalty.

That appointment is made by the Chief Justice, who might not give it to the next Justice on the bench (but probably will; I doubt a massive fruit-basket turnover would be politic in chambers, but of course I could be wrong).  Still, for the time being, the most vociferous proponent of the death penalty (the law professor's description, not mine) is no longer either on the Supreme Court, nor in charge of giving the first look at such cases coming out of Texas.

This may be a good thing immediately.  Not a reason to rejoice in death; but at least a reason to see that the arc of the universe does bend toward justice.
Posted by Rmj at 3:24 PM