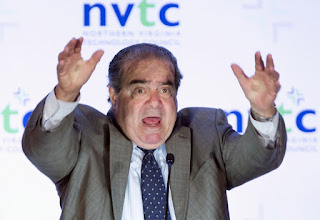 I had a long, turgid post on Scalia's "originalism," placing it in context with legal positivism and legal realism.  But the fact is, "originalism" was a scam, a con, a not-so-sly joke of Scalia's, aimed at post-modernism and its theories that rest on the necessity to interpret, and how interpretation undermines all claims to truth and absolute validity.

Scalia wanted validity, and appealing to the original intent is the way to get there.  Just ask the fundamentalists.

The past is always (still) the place where everything made sense, the present roils with confusion and alarums as ignorant armies clash by night on the darkling plain of possibility, and the future is apocalyptic:  either a blighted wasteland or a corporately-controlled hellscape.  That, at least, is the most common view of time in our culture today.  Yesterday all the past, as the poet said, and we long to return to that time when everything was orderly and unified and no one quarreled about basic tenets of civility and decency the way they do today.

So "originalism" appeals to a knee jerk reaction to believe that at one time we figured it all out, and then history or politics or just "them" intervened and messed it all up, and now we've got to get back to the Garden.  Not move forward; never forward; that way lies disaster and more of the present same.  Back, we must beat back against the tide, into the past where life was simpler and more true.

Dahlia Lithwick remembers reading Scalia's opinions in law school and while disagreeing with them, still enjoying his style, his zingers, his lively writing amid the dull plodding prose of legal opinions (and they are deathly dull.  Reading legal opinions in law school textbooks can make you want to read the dictionary just for the plot.).  I'm too old to have ever read Scalia's opinions; he was appointed to the bench just before I graduated from law school.  I had to take my pleasures in finding the few cases in the books by Learned Hand or Benjamin Cardozo, judges who taught me what it meant to truly understand the law and its place in human society.  Cardozo and Hand wrote with wisdom, with compassion, with understanding for the complexities of human experience, the limits of human reason, the need to bend the law to fit the human condition.

Above all, they wrote with blazing intelligence and humble hearts.  Scalia didn't hold a candle to them.

There's much speculation Scalia will be remembered by history.  I can't join in these accolades.  The true giants, the ones who stand head and shoulders above the rest, are few and far between, and are seldom lauded by the many-headed.  People still admire Holmes (they made a movie about him!) although his legal opinions are hardly the stuff of legal history, and some are bluntly offensive (as in his defense of eugenics laws) or the completely misunderstood admonition against shouting "FIRE"! in a crowded theater.  No one quotes Cardozo or Hand, but their legal opinions are Olympian and worthy of study of what humans can achieve.

Scalia's legacy is Citizens United and Bush v. Gore, and the "broccoli argument" in the first ACA suit.

I rest my case.