One word on the Supreme Court impasse 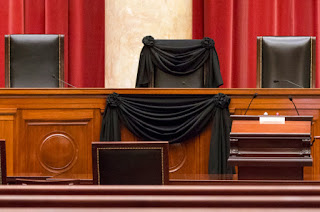 I think it the most important word.

There is no deus ex machina which saves us from the situation of refusing to abide by the fundamental principle that government exists to serve the people, and doesn't exist merely to serve power.  The only reason for the current impasse is that certain people don't want a Justice on the Supreme Court of whom they do not approve as they did of Justice Scalia.  Well, that and we have Senators willing to listen to those people above all others.

This is all about power.  Which, ultimately, is all racism is about:  who has the power, and against whom can they wield it.  This immovable object is only possible because the people placed in positions of public trust, are openly and publicly violating that public trust.

It always comes back to us.  Aye, there's the rub.

Addendum:  I would add, this morning, this article about Scalia from a former law clerk (now Harvard Law Professor) is enlightening.