"Pope Francis calls for end to the Death Penalty" 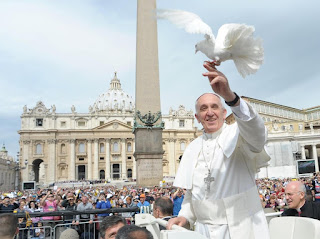 Maybe if we could connect the timing to Scalia's funeral or something:

Speaking to a crowd at St. Peter's Square on Sunday, Pope Francis called for a global ban on the death penalty, Reuters reports.

"The commandment 'You shall not kill' has absolute value and applies to both the innocent and the guilty," he said.

Otherwise, what he said on the plane home will still get more press attention in America than anything he said in Mexico or Vatican City:

On Sunday, Francis also called for better conditions in prisons.

He's serious about this:

"I make an appeal to the conscience of all rulers, so that we can achieve an international consensus for the abolition of the death penalty," the Pope said in his Sunday address in St. Peter's Square.

"And I propose to those among them who are Catholic to make a courageous and exemplary gesture: that no sentence is executed in this Holy Year of Mercy."


Even if bitter experience tells me mercy doesn't deliver eyeballs for internet ads, lighting a candle is still better than cursing the darkness.