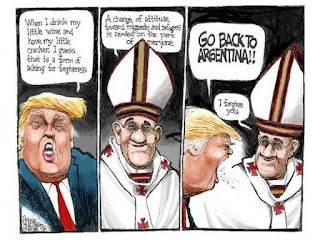 Does this make sense to anyone else?

The Mexican government and its leadership has made many disparaging remarks about me to the Pope, because they want to continue to rip off the United States, both on trade and at the border, and they understand I am totally wise to them. The Pope only heard one side of the story - he didn’t see the crime, the drug trafficking and the negative economic impact the current policies have on the United States. He doesn’t see how Mexican leadership is outsmarting President Obama and our leadership in every aspect of negotiation.

For a religious leader to question a person’s faith is disgraceful. I am proud to be a Christian and as President I will not allow Christianity to be consistently attacked and weakened, unlike what is happening now, with our current President. No leader, especially a religious leader, should have the right to question another man’s religion or faith. They are using the Pope as a pawn and they should be ashamed of themselves for doing so, especially when so many lives are involved and when illegal immigration is so rampant.


The Pope, leader of Catholics the world over, the man who brokered the rapprochement between Cuba and the U.S., was hoodwinked by Mexico?  Because he said this?

"A person who thinks only about building walls, wherever they may be, and not of building bridges, is not Christian. This is not the gospel," he said.

He declined to say whether Americans should vote for Mr Trump, who is leading the Republican race for president.

"I say only that this man is not Christian if he has said things like that. We must see if he said things in that way and I will give him the benefit of the doubt," the Pope said.

This is a man who visited a prison in Mexico and told the prisoners there:

His visit was seen as a chance to give hope to the city's residents, who lived through a spate of murders of women and rampant drug violence which meant few dared leave their homes at night.

"The problem of security is not resolved only by incarcerating; rather, it calls us to intervene by confronting the structural and cultural causes of insecurity that impact the entire social framework," the pope told the inmates.

Which is a far more radical assessment and critique of the social order than even denouncing institutional racism.  And in his Mass, celebrated in Cuidad Juarez, the pontiff noted:

"We cannot deny the humanitarian crisis which in recent years has meant the migration of thousands of people, whether by train or highway or on foot, crossing hundreds of kilometers through mountains, deserts and inhospitable zones," he said. "They are our brothers and sisters, who are being expelled by poverty and violence, drug trafficking and organized crime."

Francis also praised the work of activists who "are on the front lines, often risking their own lives" to help those caught up in the migration crisis. "By their very lives, they are prophets of mercy," he said.

And then, in a pointed message, Francis added a politically charged greeting to the 30,000 people gathered in the Sun Bowl to watch the simulcast on giant TV screens.

"Thanks to the help of technology, we can pray, sing and celebrate together this merciful love which the Lord gives us, and which no frontier can prevent us from sharing," Francis said. "Thank you, brothers and sisters of El Paso, for making us feel like one family and the same Christian community."

And what's that promise that Trump will protect Christianity when he's president, and that a religious leader questioning Trump's faith is an attack on Christianity itself?  Are we gonna fire up the Protestant v. Catholic animosities of 500 years ago just as the Reformation reaches its 500th birthday?  Are we supposed to be electing an American Pope?

This is seriously nuts.
Posted by Rmj at 5:30 PM