It's still raining down in Texas 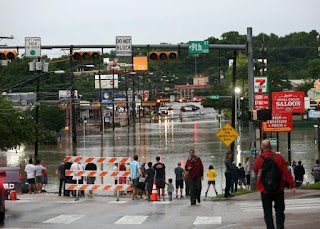 The flooding in Texas is due to climate change, no doubt.  Recovery from the severe drought has now turned into flooding and far more rain than we needed.  But climate change is a nebulous theory and too easily blamed for whatever ails you, and just as easily dismissed as irrelevant to any immediate crisis.

It doesn't help that the leaders of Texas dismiss climate change out of hand.  But where those leaders are definitely culpable is in disinterest to flood control or to controlling urban sprawl:

“The main challenge to rational planning for flood risk in the country is that private property rights trump even modest limitations on floodplain development,” Nicholas Pinter, a professor of geology and environmental resources and policy at Southern Illinois University, told the Times. “And that sentiment runs deep in Texas. The result is unchecked construction on flood-prone land, up to the present day and in some places even accelerating.”

The flooding risk in parts of Texas and communities’ vulnerabilities are well-understood, even by state officials, but it’s unclear if authorities will take steps to mitigate exposure to flood hazards and build more resilient cities.

Houston faces major challenges from flooding, challenges it has effectively ignored for generations.  It isn't hard to find someone here who has lived here long enough to know someone who's house was eventually razed due to flooding, flooding that never occurred until even more development (and the impervious cover it brings) went in near them, causing them to be flooded out.  The consistent response to that by local officials was to ignore the problem, deny the problem, and when all else failed, buy and destroy the flooded neighborhoods and so eliminate the problem.  Anything rather than control the developers and their desire to put down even more impervious cover than before.

I-10 runs near me.  It was widened considerably a few years ago, and flooding in my neighborhood has been worse since.  It isn't a simple correlation, since my neighborhood is actually uphill from I-10.  But water that once drained away from my street now drains much slower because there is so much more water downhill from me in the system, water pouring off the freeway which was doubled in size (16 lanes, up from 8) and dumping in the same storm sewers which were always there.   There is also a large shopping center which was once more open field than concrete, and no provision in that parking lot for any runoff abatement (the kind of thing the city of Austin required after the Memorial Day flood in 1981).  We know how to do this, in other words; we just don't.

Sucks to be you, pilgrim.

What are our leaders worried about?  Bathrooms.  Our schools may be closing due to rising flood waters, but at least Dan Patrick and Greg Abbott and Ken Paxton are keeping their bathrooms safe from transgendered students. of which I'm sure there are at least a few in all of Texas.*  The number of people being flooded out of their homes and businesses?  Well, at least the Mayor of Houston is worried about it.  He understands that, if people can't live here, they won't.  Whether the other powers of Houston, and Texas, recognize that remains to be seen.

*Patrick is asking Paxton to issue an AG's opinion on the policy of the Fort Worth ISD.  People are drowning, houses and cars are floating as I write, and Dan Patrick is afraid that someone somewhere in Texas might be treated like a human being.